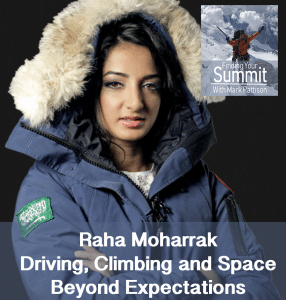 Growing up in Saudi Arabia, females didn’t pick internationally famous mountain climber as an occupation. However, Raha Moharrak was an odd one (her words) who didn’t handle authority well. Always struggling to fit into the cookie cutter mold, hyper and opinionated Raha sought out  spots as an outlet for her energy.

As Raha grew older, her defiant streak pushed her further. First, she didn’t want to have a guardian, a norm in Saudi Arabian culture, when she went out. Second, Raha doesn’t wear a hijab. Finally, the moment the Saudi government allowed women to drive, she grabbed the keys from her dad and hit the road.

Along her path, Raha pushed, climbed and established new norms. Before bagging the 7 Summits–Raha struggled with sponsorships. Nobody wanted the, “Odd One.” However, like anything else in life, she kept at it.

Turns out, nations love winners. People follow those that won’t be defined by molds. Brands seek the most noteworthy figures.

Now that Raha has moved beyond expectations. She finds sponsors, she’s a brand ambassador, a public speaker, and has her eye on a new prize.

Being someone that pushes norms, Raha’s often seen–

Yes, the adventures are one thing, setting an example for the modern Arab woman another, but the most important is feeing that curiosity.

Finally, these experiences and adventures are what Rafa craves from life. Probably, the most incredible things is Raha’s desire to travel to the stars. She notes, there’s not shame in failing. The shame she says, is in not trying. Raha intends to find an avenue to get to space, due to the  expanding marketplace for civilian space travel, maybe she’s got it in her to travel beyond expectations again.