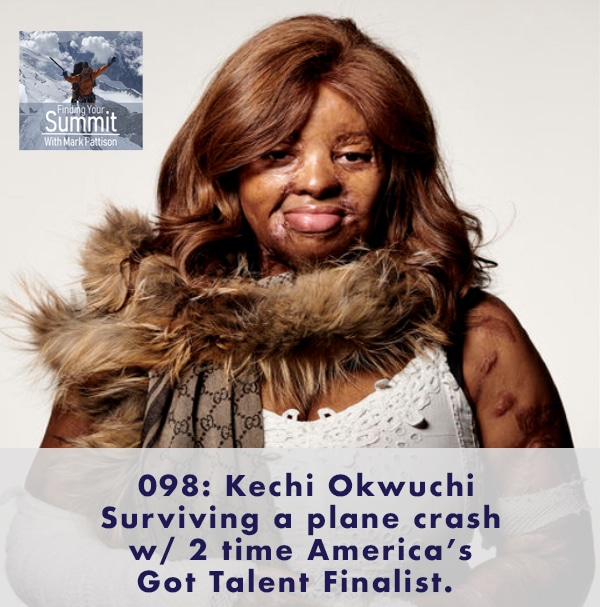 Kechi Okwuchi is a Nigerian-born self-taught singer and plane crash survivor. Since becoming a finalist on America’s Got Talent in 2017, she has become a traveling artist, inspirational speaker and burn survivor advocate. Throughout the difficult journey of her burns recovery, Kechi was sustained by her faith, her family and her music.

On June 10th, 2018, she released her first single, “Don’t You Dare,” on all music platforms, and in 2019, she became a finalist on America’s Got Talent: The Champions through Simon Cowell’s “golden buzzer.” Kechi has now chosen to forge ahead on a path that allows her to explore both business and artistic opportunities.

On this gripping podcast episode of Finding Your Summit, Kechi Okwuchi shares her experience as one of two survivors from a major plane crash in 2005, and she discusses the role that music played in her long journey to recovery. Kechi’s compelling story is one of hope & perseverance; I have no doubt you’ll take as much inspiration from this episode as I have.

Kechi shares her experience as one of two survivors from the Sosoliso Airlines Flight 1145 crash in December 2005 that claimed 107 lives, 60 of which were her school mates. She sustained 3rd-degree burns over 65% of her body.

Kechi talks about how her life was saved in a South African hospital and how Shriner’s Hospital in Galveston, TX gave her back her life and independence via reconstructive surgery.

Kechi discusses how music kept her connected even while she was in a coma and how it actually became part of her prescribed therapy. Kechi recalls how her singing voice mysteriously improved after the crash as she found her true voice on a home karaoke machine and in a church choir.

Kechi recalls the emotions she faced as her life took a stunning new trajectory into a professional singing career and how America’s Got Talent became a platform for her to be an Ambassador of Hope for other victims of trauma.

You don’t want to miss the end of the podcast where Kechi hints at the release of some upcoming projects and may even treat us to a solo Acapella!

With each of my podcast episodes I intend to bring you stories of overcoming adversity and discovering victory. The story of Kechi Okwuchi exemplifies this beyond any other that I can think of. The trauma of experiencing and surviving a major plane crash as a teenager and then going down a multi-year road of recovery could have been debilitating. All of her classmates were killed and she experienced 3rd-degree burns on over 65% of her body. Many people never make it back from an experience like this and they become defined by their tragedy.

But something different happened with Kechi. She held onto her love for music and remained grateful for the doctors and hospitals that saved and restored her life. Kechi’s music became her therapy and ultimately her pathway to a summit greater than she could’ve ever imagined.

Kechi wasn’t discontent with starting small – singing on her home karaoke machine and in her church choir. She set goals to continue her academic training and accomplished those goals one after another. Her goals weren’t to be famous; they were to keep moving forward and as a result she is now a touring singer and inspirational speaker. Kechi’s scars don’t define her.

As I watched the video of Kechi singing on stage I saw what the judges and America saw: a woman who’s inner beauty blossomed as she expressed herself through song. I truly believe she is more than a “one-hit wonder”. She reminds me of Kelly Clarkson, a singer that has the type of talent, range, and versatility that can endure. Kechi Okwuchi is a walking reminder for us that there’s life after trauma. She has utilized her visibility on America’s Got Talent as a platform to be an Ambassador of Hope to other burn victims. She knows that is she can inspire just one person each day then she’s made a difference, and boy is she doing that!