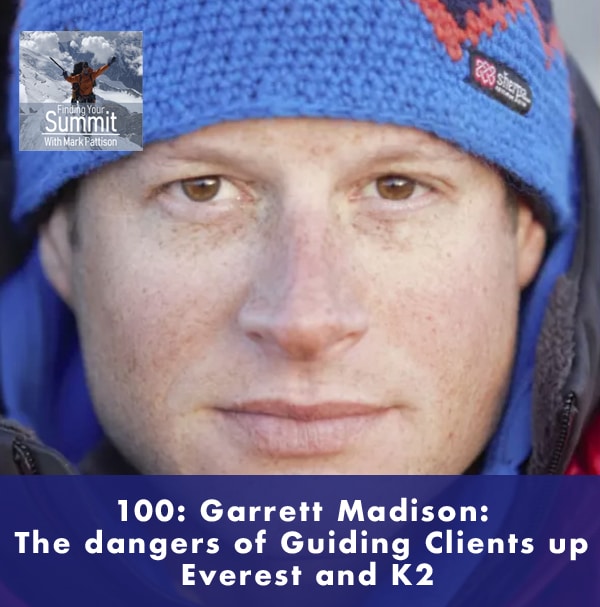 Garrett Madison of Madison Mountaineering is a world-class mountaineer and guide and also holds multiple high altitude mountaineering world records. His records include first person to summit Mt. Everest and Lhotse in less than 24 hours, the only person to climb Mt. Everest and Mt. Lhotse three times in one day, first person to guide a successful ascent of K2, first American to summit K2 more than once and he has personally led more climbers to summit Mt. Everest and K2 than anyone else. As an executive producer, Garrett Madison was awarded the 2017 Sports Emmy in Outstanding Digital Innovation for the resulting SI.com/Life VR production, Capturing Everest

Madison got hooked on mountaineering when he began ascending and summiting Mt. Rainier (Washington) as a teenager. In college, he decided to get a job as a mountain guide in order to keep spending time up in the mountains. He joined RMI as an apprentice mountain guide in 1999 worked there for 8 summer seasons. Madison transitioned to Alpine Ascents in 2007 and started guiding in Argentina (Aconcagua), Antarctica (Vinson) and eventually Everest. In 2014, he started his own guide service, Madison Mountaineering, and at the time of this podcast release, he is currently preparing to summit Everest for the 10th time.

On this intriguing episode of Finding Your Summit Podcast, mountaineer Garrett Madison shares his thoughts on what it takes to successfully ascend and summit the world’s tallest peaks from a guide’s perspective. He tells us about how his passion for mountaineering developed as a child and teenager while on hiking trips with his father. Garrett brings us through his journey of working with two of the most well-known guide companies for years before starting his own in 2014. Listen in as Garrett discusses preparation, hard work, achievement and mental toughness on the world’s tallest peaks. If you’re anything like me you’ll be on the edge of your seat for this podcast as Garrett’s story inspires us all to reach our summit!

Garrett discusses his love for mountaineering and guiding. While on hiking trips as a child, he recalls always feeling led to scramble up to the highest ridgelines and get a 360-degree view from the summit. As a guide, he says, “It’s hard but it’s fun”. He discusses the feelings of helping a client reach the summit and what it means to him personally.

Garrett and I talk about the challenge and responsibility of guiding groups up Everest, K2 and other high altitude peaks. He says, “It’s challenging when you sign up for a climbing group and you don’t know everyone and know their level of preparation and training.” His goal as lead guide is to make expeditions safe and enjoyable.

Garrett recalls, firsthand, the deadly avalanche and wind blast on Mt. Everest in 2014 and 2015 respectively. He was on the mountain both years as these events occurred, and he discusses his involvement in rescue operations and planning new, safer routes up the mountain.

Garrett shares about his company’s strategic approach to guiding climbers to the summit of K2, the “Holy Grail of Mountaineering”. Garrett’s approach to climbing K2 is Modernization. His company utilizes modern oxygen equipment and weather forecasting systems. He utilizes a complete team approach by flying in his climbing Sherpas from Everest to assist.

Ed discusses the importance of External Self Awareness – this is where a lot of us are very uncomfortable. We have to push past this comfort zone and ask others what they truly think of us. We have to dive into external self-awareness. When your inside of the frame it’s hard to see the picture sometime.

Garrett discusses the importance of mental toughness and hard work in mountaineering. He says, “You put in hard work & training, so for game-time, you’re ready to go.” Garrett shares his Mentality: One day at a time. Moment by moment. Re-assess risk. Adapt.

Mountaineering is a dangerous sport and its full of risks and peril. On Mt. Everest, guides deal with snow, ice and rock that could fall down in the form of an avalanche. Steep slopes and crevasses where climbers can slip and fall to their death. High altitude risk (death zone), high winds and extreme cold on the summit. The death rate for summiteers on K2 is a shocking 25! Climbers that don’t mentally and physically prepare for this journey for months or even years may find themselves in a life-threatening scenario.

This is where a professional mountain man like Garrett Madison comes in. Garrett is blessed to have the opportunity to travel 10 months a year on mountaineering expeditions. Not everyone gets this opportunity to train in the mountains/glaciers at altitude, and he is extremely grateful for this. He spends this time planning the strategy, safety and enjoyment of future expeditions for his clients.

In referring to hard work and preparation for each expedition, Garrett says, “You get out what you put in”. No one benefits from this more than Garrett Madison. Not only has he personally reached the tallest summits in the world, but he has guided more climbers to do this than anyone else in the world.

When he talks about doing the Mt. Everest to Mt. Lhotse summit in less than 24 hours he says, “It’s always tough just to get going…to get out of bed in the middle of the night when its cold, dark, windy and everyone else is sleeping. It takes motivation to get going. But once you get going you feel like you’re in the game…you see the prize/the ultimate goal!”