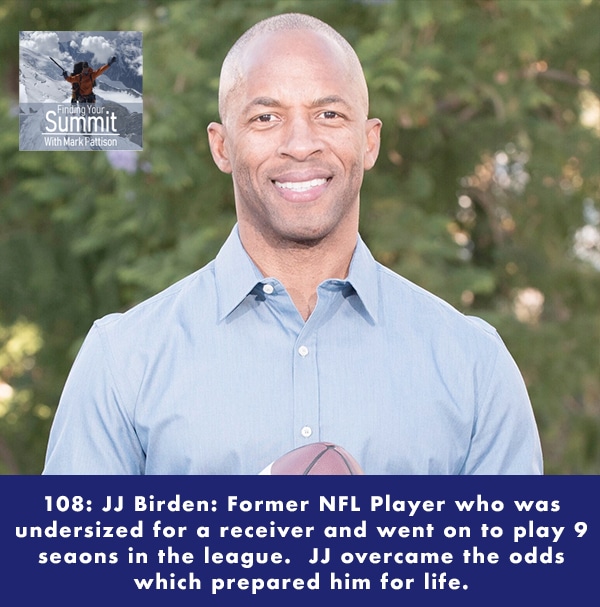 JJ Birden was not a kid that grew up always wanting to be a professional football player in the NFL. But, he was definitely a young athlete with the heart of a lion and the head of a champion. But how exactly did JJ Birden pivot from track-and-field with Olympic dreams to football? JJ shares: “I played football in high school and I was the number wide receiver in the state of Oregon. But at 5’9” and 133lbs every Division 1 school that came through just said, ‘you should go to Division 3 or junior college, and I took it as a personal insult.” Having people constantly tell him he couldn’t turned into the motivation to prove to them all that he could. University of Oregon was the only college willing to allow JJ Birden to play football and run track and field. JJ wasn’t even focused on going pro on the football field, he just wanted to prove all of his naysayers wrong–and he did.

On this episode of Finding Your Summit Podcast, we talk with JJ Birden, an ex-NFL wide receiver who played for the Cleveland Browns, the Dallas Cowboys, the Kansas City Chiefs, and the Atlanta Falcons for a total of nine years. This could have easily never happened if JJ hadn’t created his own opportunity after football coaches weren’t trying to recruit him. He started secretly watching the spring practices and sizing up the players. JJ’s college coach Rich Brooks invited JJ to his office for a 30-minute meeting, JJ convinced him, and the rest is history. Since retiring his helmet and shoulder pads, JJ has transitioned into not just being a father of eight and a husband for 29 years, but also a best-selling author, a motivational keynote speaker, an entrepreneur, and the President of Team X 88. JJ Birden promotes health, wellness, fitness, leadership, and the cultivation of a positive successful mindset to turn the wildest dreams into tangible realities.

JJ Birden talks about how he was able to stay motivated in the game of football in spite of his smaller size and even after multiple injuries, stating that: “I had the major chip on my shoulder. But you have to understand there was a history of me being in this situation. My whole life I was always the little guy. The little guy in grade school. The little guy in junior high and high school. I was always the little guy. So I was constantly proving myself and surprising everyone.” JJ digs into his past early college days, and refreshingly doesn’t sugarcoat any of the less flattering details: “I was basically number two for two years. I caught three balls my freshman year and three balls my sophomore year. So again, I wasn’t your prototypical NFL player and it was still not even a thought in my head at that point.” Even after describing his major injuries, JJ Birden never considered quitting…ever. “Setbacks are the perfect opportunity for comebacks,” he says.

What was it like for JJ Birden when he got involved in the NFL? In the midst of qualifying for the 1988 Olympic trials for track and field, he was drafted in the 8th round by the Cleveland Browns as the 216th draft pick. Birden discusses the injury that put him into the injured reserve, getting paid but not able to play for the first year of his professional career with the Cleveland Browns. He remained focused as Birden states, “I’m a very positive person. And positive people see the bright side of everything.” JJ gained the belief that he could actually play at the NFL level while he was recovering and was ready to back it up with hard work.

“Success leaves clues” says JJ in reference to learning all he could from superstar Kansas City Chiefs teammate Joe Montana, further stating: “I was impressed with Joe right away from day one, because, not only was he down to Earth, but here is a guy in his 15th year, he’s 36 years old. He’s already won four Super Bowls. He’s won all these other accolades. But, the guy came in like a rookie. We used to say, ‘he studies like a rookie, he prepared like a veteran, and he led like a pro.’ He was so hungry to finish his career on point.”

A nine-year career isn’t the entire length of JJ Birden’s triumphant success story. Birden learned as a player that he was financially vested after his fourth season, but he was already thinking about his Plan B before his career was over, networking with business professionals before retiring from football. JJ says: “I took what money we had and I invested in six companies, made small investments in six different companies. Several were in the medical industry. One was an internet company and three were medical-based companies.”

JJ Birden isn’t just all business. He also won really big as a family man. After getting a call from his young nephew that things weren’t going so well with him and his four other siblings, JJ Birden came to visit and within 24 hours found himself in court in a position to adopt them all after his wife encouraged this decision, saving them from foster care.

Find out from JJ Birden what you will learn when you purchase a copy of his book: “When Opportunity Knocks, 8 Surefire Ways to Take Advantage!” JJ provides the importance of having a strong ‘why’ to give yourself strength and motivation to not quit. As JJ says, “If your ‘why’ is strong enough, the process to get there is not a challenge. You will do whatever it takes.” Also, you will get knowledge about understanding and preparing a game plan for how you are going to get to your goals. When it comes to cultivating productive habits, JJ explains, “How you do anything is how you do everything.”

When JJ Birden travels all over the map for motivation speaking engagements, what are the core signature keynote speeches he gives? JJ provides details about his current four main talking topics, “Seizing Your Opportunities,” “There Better Be an ‘I’ in Team,” “Owning the Championship Mindset,” and “Every Day is Game Day.” Come get inspired by the JJ Birden interview on Finding Your Summit Podcast.