123: Aaron Hale: Former War Hero who was blown up by IED bomb and went blind in Afghanistan discusses his journey of recovery, extraordinary achievement, and now operating a thriving Fudge business.

Aaron Hale, before he joined the military, he never saw that lifestyle for himself. “I grew up living a good life, I was a patriot. I loved my country. But didn’t see the military as a career path for me. But a disastrous showing in college, pretty much just living Animal House life. I realised I needed to find direction. I needed discipline and I needed to earn my tuition money back.” Watching friends move beyond him in their progress pushed Aaron towards signing up for military duty. “The problem with natural ability is that eventually it fails you. At some point, your peers in whatever you are doing, surpass you.” 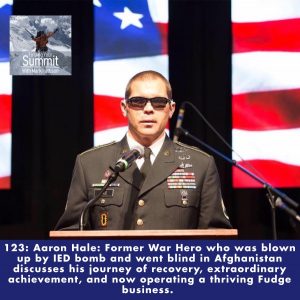 On this episode of Finding Your Summit Podcast, we talk with Aaron Hale, Former War Hero and Owner of EOD fudge and confections company, discusses the many ways military service pushed him to move beyond his limitations: “Joining the Navy, going into basic training, and the very first thing they said at basic training, it was the instructors, said, ‘Who here has some college experience?’ Only two people, me included, raised their hand. And he pointed at me and said, ‘OK, you are in charge of these 80 recruits.’ On one side of his military experience he learned valuable leadership skills and was able to pursue his passion for cooking. On a more painful level, Aaron lost his eye sight from an IED bomb blast.

Listen to “Aaron Hale: Former War Hero who was blown up by IED bomb and went blind in Afghanistan discusses his journey of recovery, extraordinary achi” on Spreaker.

Aaron Hale talks about cooking on a Navy ship while being a military leader and traveling to Italy: “I would be stationed on-shore in Italy. And when I got off the plane and met my command, I said, ‘Where am I going to be cooking?’ And they didn’t tell me this in school. But, in the Navy, they looked at cooks as the civilian equivalent of hotel restaurant management. They said, ‘No, No, No, on shore we don’t do the cooking. Civilians do that.’ ‘What am I going to be doing?’ ‘You are going to be running the barracks, our version of the hotel.’”

In 2006, what direction did he want to go to? “I volunteered to be an individual augmentee, basically AirForce and Navy personnel filling in Army roles in Afghanistan. So, I would be cooking, but this time I would be running an Army town hall for a base…So, now instead of the admiral staff of about 25 or so, I was running a huge kitchen of 400, 500, 600, 700 NATO troops.”

What was it like getting involved in the EOD, Explosive Ordnance Disposal? “The EOD technicians are the military’s bomb squad…I was instantly hooked. The tight-knit brotherhood, the technical aspect of it. The fact that we are first responders. We are there to take hazards off the battlefield. Anything that goes BOOM from bullets to nuclear weapons, we are the first responders.” He was deployed to Iraq, a year later to Afghanistan as an EOD team leader.

IEDs are explosives are put in the ground with the intention of blowing up vehicles that drive over them, and potentially killing the passengers inside them. Aaron Hale discusses the horrific moment when he was hit with an explosive blast. “It punted me into the sky. I landed on my knees and elbow. Still conscious, but the lights went out. I was tossed into pitch black. Of course, first things first, I wiggled fingers and toes, did a systems, functions check. My knees and elbows seemed to be all intact. The only thing was I couldn’t see a thing.”

Aaron Hale shares that the IED bomb only hit him in the head. “From the neck down I was virtually unscathed. But, it cracked my skull. I was leaking spinal fluid right out my nose. Blew up both of my ear drums. My right eardrum far worse than my left. There were scars, burns. When an explosion goes off, there is secondary fragmentation, rocks and dirt and everything. That just melted my face. I was pulling rocks out of my gums for days.”

Learning to be Blind

How long was Aaron in a place of recovery and did he experience a state of depression? “I thank the powers that be every single day that I didn’t bring back PTSD or depression or those severely traumatic internal wounds of war. And also, in relation to other injuries, I got off pretty easily.”

Strong family, a lot of support, and being naturally wired to be resistant to depression helped Aaron fight back for his life. He and went to blind school for six months, learning living and manual skills, as well as computer and phone technologies.

Also during this episode of Finding Your Summit Podcast, Aaron shares how hard it was to overcome bacterial meningitis, “It is a horrible bug. It attacks the brain. To me, it felt like just pouring acid right into your brain. Like it was getting squeezed by a vice. Like an alligator was crushing my head. It was a horrible experience. Far worse than the IED. I was out for four days.” He had hallucinations, confusion, and between high doses of antibiotics and the bacteria itself, it took was was left of his hearing and quite a bit of his vestibular balance. Learn more from Aaron Hale about his company located at EODFudge.com, where Aaron Hale sells handcrafted confections, using his love of cooking. The name itself incorporates the life-altering experience he had with explosive ordnance disposal.