124: Floyd Landis: Former Tour de France cyclist winner who was stripped of doping overcame this widely reported setback and reestablished himself in the CBD business by starting Floyd’s On The Go and Floyd’s Of Leadville.

Floyd Landis, grew up in an insular Mennonite community in Pennsylvania, where participating in politics and the broader economy wasn’t a part of life. Somehow even inside this tightknit community without many outside influences Floyd Landis managed to come across a passion for cycling. “When you are a kid, you are only exposed to so much. But you find something that you enjoy doing. I happened to be talented at it, right? And I happened to pick it up at right about the time that mountain biking sort of became a thing. Really, it was probably the early 90s when mountain biking became a term.” 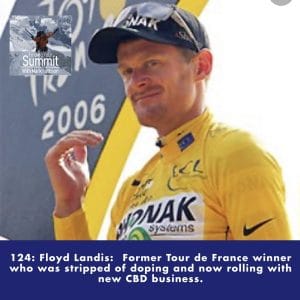 On this episode of Finding Your Summit Podcast, we talk with Floyd Landis, Cyclist Winner of the 2006 Tour de France, and Founder of Floyd’s of Leadville, a CBD business. What was it about riding bikes that got Floyd sucked into it? “I liked riding my bike. For me, initially, it was kind of therapy. You know, just riding and thinking about life. To some extent, that is what a lot of endurance sports are, right?” Find out how this led to the Tour de France and a world of controversy with his cyclist team leader Lance Armstong.

Floyd’s father didn’t see bike riding or professional sports as something that represented work and a way to live your life. “Life is long right? I think that both of my parents have watched everything happen and sort of changed as well and learned a lot about the world and the way it works. But, back then, yeah, he just saw it as sort of, ok, great, you want to ride your bike from time to time or use it to get around, that’s one thing. But, if that is all you think about and that is all you do, that probably isn’t a healthy way to live.”

Does Floyd still practice the Mennonite ways? “No. I wouldn’t classify myself as religious at all at this point…They are great parents and it is not a bad religion or at least doesn’t have a lot of negative outcomes. Their belief system and the way they treat me is great and I think there is a lot to be said for that. But I don’t practice. I don’t go to church. I’m not part of that community anymore.”

How much of cycling is talent and how much is training? “You can train for years and years. But you have to have some underlying innate talent that you don’t really have any control over and you have to be born with right? There are a few people in the world given the right circumstances and training in any given year could win the Tour de France. And then there are billions of people that simply don’t have that, for lack of a better word, talent.”

What were the early days of cycling like for Floyd Landis? “I did well on the mountain bike side of things where it didn’t require a team. So it wasn’t prohibitively expensive to go and race your bike. So I got to a certain point where I realized that my skills were better suited for road racing. So, I started doing some of that and I got picked up by a small American team. Well, at the time it was the biggest American continental team, it was sponsored by Mercury the car company. And I was on that team for two and a half years and we won a lot of the U.S. races.”

How widely used were enhancement drugs among cycling teams? “It was out in the open once you were on the team. And even on a smaller team when you are in the sport, performance-enhancing drugs were generally talked about and it was more or less an  open secret.” Floyd said that he didn’t have to use big amounts of these drugs because cyclists aren’t trying to get bigger muscles.

After Winning the Tour de France

What was Floyd’s life like after getting in trouble for enhancement drugs four days after winning the Tour de France with his team leader Lance Armstrong? He didn’t have a team of public relations people to advise him on how to handle the situation. “It was probably the worst thing I ever felt. It took me years to recover from it. I was conflicted so I wasn’t as good at being defiant as Lance (Armstrong) was. I mean look, he had years of being famous before he ever had to address this. I was on this team. So, I had some attention from the press. But really they didn’t care about me.”

Floyd’s On The Go

During this episode of Finding Your Summit Podcast, Floyd Landis also talks about starting Floyd’s On The Go and the bigger company Floyd’s Of Leadville. “We have four dispensaries in Oregon. Three in Portland, on the I-5 near the Washington border. And we have one in Colorado as well. That is probably half of our time, that side of the business. Then the other half is growing hemp, we grow it now in Pennsylvania. The CBD side, as long as it is derived from hemp, it is not required to be sold through dispensaries and there is a much bigger market right? We can send it to any state.”