126: Peter Cetera: American singer, songwriter, bassist, and an original member of the superstar rock group Chicago who has found his summit from his humble beginnings in the south side of Chicago to an award-winning career, including 17 albums with Chicago and 8 solo albums.

Did you know that Peter Cetera also had the desire to be an athlete? But what was it that pushed this shining star to follow the guiding light of a magical music career? “I think when people ask me about singing, to me it was the emotion I think is the thing I gave, that I tried to give to everything I sang. Emotion. Feeling. I may not be the best scat singer or whatever. But, I try to sing from the heart, from the feeling. And I think that comes through to a lot of people.” 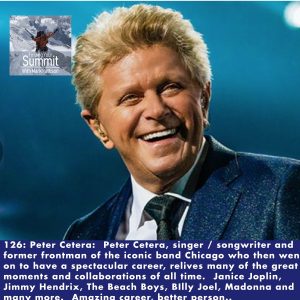 On this episode of Finding Your Summit Podcast, we talk with Peter Cetera, American singer, songwriter, bassist, an original member of the legendary rock group Chicago. What was it like for Peter Cetera during the early years of performing? “I was a reluctant performer let’s just say. You know, I never walked on stage with that, ‘I’m going to slay ‘em.’ I always walked on stage with, ‘Oh my God. I can’t breathe.’ Really. Seriously. And it is just like sports. It takes you a couple of plays to get into the game.”

Peter Cetera started his band in high school, never went to college, and never turned back from music. But what sparked that occupational inspiration? “These two older guys, older maybe 19 or 20, took me to this teenaged rock ‘n roll club. It looked like a real thing, except no booze. This group comes on, The Rebel Rockets, from Mattoon, Illinois, and both guitar players stood on top of the amps. The lead singer wore sunglasses. And it was about the coolest thing I ever seen or heard. And that right there, I just went, ‘I want to do that.’”

What was the music grind like for Peter Cetera, making the transition from Chicago to Los Angeles, where Chicago went on to play hundreds and hundreds of shows in night clubs and colleges? “It took a little while. But we all drove out from Chicago. I drove out in my ‘67 Volkswagen, pulling a trailer, and we all went on to L.A. We lived in the same house. Eight guys in a house, seven of us and a road manager. We just started working clubs.”

Peter Cetera shares the electric excitement of opening up for Jimi Hendrix? “There is a knock on the door and it’s our road manager and he walks in and his eyes are bulging and he goes, ‘Jimi Hendrix wants to come see you guys.’ So, Hendrix walks in the room and the door opens, and there he is with that black kind of flat brimmed hat and all the accoutrements…he walks in and goes, ‘You cats are mother f**kers.’ Just like that. I was like, ‘Whoa!’ So he came in and he sat and talked with us the whole set and he goes, ‘God, you guys are so good.’ And sure enough, shortly after that his manager got a hold of us and says, ‘He wants to take you as his opening act.’ What? Let’s go!”

Peter Cetera talks about the process of contributing music to major movies, such as “Glory of Love” for The Karate Kid II that was originally written for Rocky IV. “In the case of that one, they sent me a tape. Not of the whole movie. Just a VHS tape and the script and I sat there and watched it for a couple things and, ‘Let’s see, fighting. Hmm.’ You know? And I had this chord track and I started singing and, ‘We did it all…hmmm…oh…the glory of love. Hey, wait a minute, what if it is like knights in shining armor.’ I just came along that thing…I finished it and I thought, It’s the first and only song where I thought… ‘That’s a hit. It’s got to be a hit. They got to love this. We took it back and they turned it down. Stallone turned it down.”

How did Peter Cetera’s work with Chicago come to an end? “The big thing about the whole group was drinking and drugs. I mean, that was the big downfall. Let’s state that clearly. Big downfall. And we all did it. Some of us got burned out more than the others and some of us quit. That was the downfall of it. Because nobody around you ever said, ‘Hey man, could you knock off doing that blow?’ You know? Nobody ever said that.”

David Foster is the mega-successful record producer that Peter Cetera considers the best piano player he ever worked with. What exactly is it that Peter feels David brings to the table in the studio? “Foster, he brought positiveness. He brought musicianship. And he just went, ‘No, those songs stinks. He was magical to work with. I loved working with the guy, and we had a good string of things and then he went on to bigger and better things”

During this episode of Finding Your Summit Podcast, Peter Cetera also talks about the interest he has had in mountain climbing, as well as the many  talented singers and musicians he has collaborated with, from The Beach Boys, Chaka Khan, to even Madonna. “When everyone gets behind that mic, all of a sudden they turn into a real person. They don’t have that, ‘Look at me mother f**ker.’ No, no, no. That goes all away. They are just as nervous as I am and they get over it. What was shocking to me was, Madonna was the most fun. She was great. She pulled up in her own car. Came in. Laughed. Talk. Joke. Learned the part. Sang. It was great.”