127: Chris Waddell: American Paralympic Sit-Skier and Wheelchair Track Athlete, and Founder of One Revolution shares how he went from being paralysed from the waist and found his summit of inner strength and determination to win 13 Paralympic medals.

Chris Waddell, who grew up in Western Massachusetts, an hour and a half from Boston,  experienced his life-changing accident while ski racing with his brother while on break from Middlebury College. Chris said that, ‘In the middle of a turn, my ski popped off. It was as freak as things go. There was no reason. It was a warm day. It was soft. I fell in the middle of the trail. I didn’t hit anything but the ground. But whatever I did, I must have done it in a weird way. So I broke two vertebrae, damaged the spinal cord. I don’t remember anything after losing my ski.’ Learn how Chris Waddell went from this traumatic injury to earning 13 Paralympic medals as well as getting inducted into the Paralympic Hall of Fame. 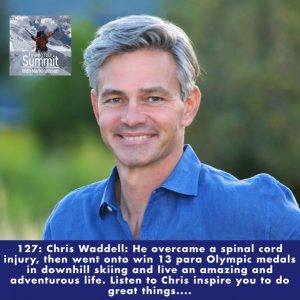 On this episode of Finding Your Summit Podcast, we talk with Chris Waddell, American Paralympic Sit-Skier and Wheelchair Track Athlete, and Founder of One Revolution. The chat takes place in Squaw Valley during the Spartan World Championships Media Fest. Chris was parlyized in college from the waist down, and currently gets around in a wheelchair. “Actually when I was leaving the hospital the doctor called me into his office and he said, ‘You are not ready to leave because you haven’t been depressed,’ which is perplexing. But he was worried that I was in denial. For me, I was like, I will be depressed later. But right now, I need all my energy going into getting better. It was the most powerful I have ever been.”

Listen to “Chris Waddell: American Paralympic Sit-Skier and Wheelchair Track Athlete, and Founder of One Revolution shares how he went from being paral” on Spreaker.

One key thing that radiates from Chris Waddell is that he has a positive bright outlook on life. “Goals are easy to set when everything is going great. What really becomes challenging and meaningful is when everything is against you.” How did he change to such a strong mindset? With his body losing weight and not being able to be independently mobile, he became mentally strong to realize what is possible and maintain hope to give his body the best opportunity to heal.

“The first thing I needed to accomplish? Wow. The first thing was getting out of bed. Getting into the wheelchair.” He had to learn a process from a nurse to get himself up by putting his hands in his pockets and using his elbows. After being bed-ridden for such an extensive time, his weight had dropped down to about 125 pounds at this point.

What did it take to have the courage to get back out skiing and learning to do so with one ski? Seeing a woman who was a one-legged skier was a great model for what was possible. He accepted an offer from a friend to be in a documentary about adaptive skiing. Friends of Middlebury Skiing bought Chris his first monoski. “I wanted to do things that were impossible. I wanted to stretch their imaginations.”

How was Chris Waddell subsidizing his life during this period? “Back then, it was a matter of getting sponsors. I was lucky. I had some sponsors that came onboard. Swissy Army, a friend of mine’s father was the owner of Swiss Army of watches and knives and stuff like that.” Chris Waddell never got paid to train and compete directly. But he also got a $2000 sponsorship from Kodak and had to live from couch to couch while he competed. He got paid to tell his story.

The Leap to the Paralympics

“There are three classes of mono skiers and I was in the most disabled of the three. So, to basically have the muscles right underneath the sternum, corresponding muscles on the back. So not a lot of torso balance. There were guys in the other classes that were double amputees that had the muscles all the way down to their knees.” Chris was committed to beat these other guys, even when he was told that it would never happen. In Lillehammer, Norway during the 1994 Winter paralympics, Chris Waddell beat all of the mono skiers in the world in the down-hill race.

Climbing Kilimanjaro in a Wheelchair

During this episode of Finding Your Summit Podcast, Chris Waddell also talks about how on September 30th, 2009 he became the first paraplegic to climb Mount Kilimanjaro. He also named the 2010 Shining Star of Perseverance Honoree by the WillReturn Council how honor those who overcome disabilities to succeed in the workplace and society. Also, hear all about his organization “One Revolution” that aims to create positive change through the use of “Nametags” that define oneself.