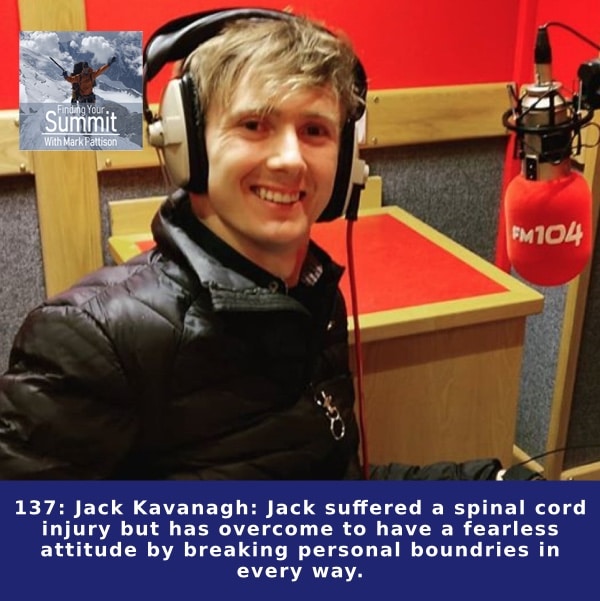 Jack Kavanagh shares how he acquired his spinal record injury at age 19, the summer that he’d finished his first year in college. “I was studying pharmacy in Trinity. I had always been interested in the intersection between health and people and how do you allow people to thrive. Just before I went back into my second year of college, I was finishing up a season having worked as a windsurfing instructor in the west of Ireland and I went away on holidays with some of my best mates. On the first day, as I had done some many times that summer, on that day as well I ran down the beach. I dived into the water over a wave, not anticipating how shallow it was, unfortunately I hit my head off the sand and in that moment I broke my neck.” 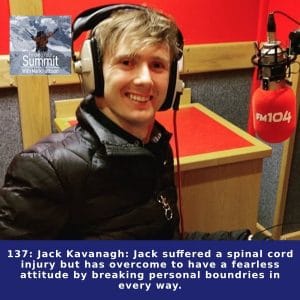 On this episode of Finding Your Summit Podcast, we talk with Jack Kavanagh, Performance & Wellbeing Coach & Speaker and Pharmacist in Dublin, Ireland. Jack provides insight into his mindset adjustments that have empowered him to overcome obstacles. “As I gradually became aware of my surroundings I do still remember one of my best friends Garrett walking around the bottom of the bed and he had obviously pulled the short straw to be the first one to come and see me. I couldn’t speak but I mouthed the words,  ‘It’s going to be OK.’ That was kind of my first decision because I did know that this was going to be a tough challenge. But I suppose I was very lucky that I had a strong sense of tenacity from before my injury.”

What was growing up like for Jack Kavanagh? “I was a very athletic guy. I played a lot of rugby. I did a lot of running. I was incredibly passionate about water sports and adventure sports. And it was a period where you push out against the limits of your own comfort zone and your family and your teachers and coaches and as I did that I started to come up with a good sense of who I was.”

What does the phrase ‘Victory is forever’ mean to Jack Kavanagh? “I’m still trying to fully understand what that meant in that moment. But for me it was in that moment and ever since, it’s really encapsulated that the little wins that you have day in and day out, whether that is in your mindset, whether it is a physical win, whether it is some sort of a business win, whatever it is, those little victories that you have along the way are things that can never be taken away.”

Jack Kavanagh discusses what he was up against while in rehab therapy. “In the months afterward, I found myself in rehab and really at that point my first job was, like a child having the umbilical cord removed, it was to learn to breathe unaided. Then I had to go on to relearn to use about 15% muscle function that was remaining. So, my shoulders, my biceps, and wrists. Physically that was very demanding. But psychologically, and you pointed out mindset a few times, it was even more demanding.”

How did Jack Kavanagh propel himself forward towards his travel goals while making a documentary called Breaking Boundaries in spite of the obstacles that his injury presented? “Confidence came from doing. Those small actions day in and day out of actually showing up and failing in small ways repeatedly. But that builds momentum and that gave me confidence over time to try some of these bigger things.”

Jack ran a GoFundMe campaign to raise the initial seed money to start the documentary. But he had to get other investors involved in Ireland as well to finish it properly with a friend who edited it and who has gone on to producing in Toronto. How did Amazon Prime get involved in Jack Kavanagh’s documentary Breaking Boundaries? “We had an agent at the time and he recommended the documentary to Prime and that is how it came about in the end.”

What was the transition that expanded Tracy’s outlook on her work? “I realised, this isn’t about me. It is not about ‘I can do it.’ It’s about ‘We can do it,’ you know? It’s about if I can do it you can do it, no excuses. We can all do it. No, limits, right? But it took me to like, 40 to figure that out that it isn’t about unstoppable me. It was like an extended teenaged headspace I think somehow.”

During this episode of Finding Your Summit Podcast, Unstoppable Tracy also discusses how her work caught the attention of major celebrities such as highlights of Oprah Winfrey, Jane Fonda, Dr. Phil, Michael Douglas, JohnTravolta, Mark Waulberg, and Mel Gibson. “Canada just industed me into the Hall of Fame two weeks ago. The Canadian Hall of Fame, it’s a specialty around the difference I made in the world of people with disabilities. Wayne Gretsky is on that wall.”

Posted in Podcast Episodes
← 136: Unstoppable Tracy: Unstoppable Tracy is amazing in every way. Physical limitations have never slowed her down to do inspiring things and inspire millions.138: Mark Allen: 6-time Ironman World Champion with an incredible mindset! →