The Ironman World Championship is a 2.4 mile swim, 112 mile cycle, to be followed by 26+ miles to run after that. How did Mark Allen begin his journey into becoming this world-class athlete that succeeded multiple times in their rigorous competition? “Two years after college I saw the Ironman on Wide World of Sports, you know, back in the day when everybody would stop on Saturday to see what Jim McKay had to say about something incredible. They were showing the Ironman Triathlon, something that I had never heard of before. I didn’t know what a triathlon was. I didn’t know what the Ironman was. He runs through what the distances were that they were going to be covering that day and I was like, ‘Are you serious?’” 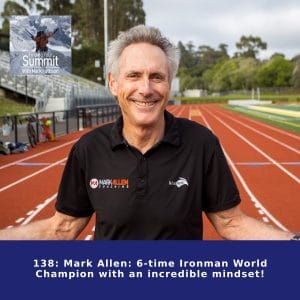 On this episode of Finding Your Summit Podcast, we talk with Mark Allen, 6x Ironman Triathlon World Champion, and Author of The Art of Competition, Fit Soul, Fit Body, and Total Triathlete.

Two weeks after Mark Allen first saw the Ironman on television the idea grew in his mind to see if he could become an Ironman. “About 9-10 months after I saw that Ironman on TV, 1982 as a 24-year-old, I was on the starting line of the Ironman. My journey to becoming an Ironman champion was certainly not automatic. The first six years that I raced in Kailua-Kona I had decent races. I was third once. I was fifth twice. I was second twice. I could be in the lead, halfway through the bike ride at the end of the bike ride, halfway through the marathon, with just a mile to go on the marathon. But I always kept falling apart at the end.”

Mark Allen doesn’t shy away from discussing his losses and the wisdom he was rewarded from them. “My wins, they are great stories, you know. But I think, for me anyway, the most empowering part of that journey that I had is that I didn’t give up. Six years I went there. Six years I didn’t achieve what I ultimately wanted to do, which was to become the Ironman champion when I saw that I had some talent in the sport. After each year after devoting an entire season to this one singular goal and falling short. I had to come back home, you know? Tail between my legs. Somehow just pick up the pieces and ask myself, ok, am I going to go back again next year? If I am, what am I going to do different so that the result is not the same?”

Mark Allen discusses NBA superstar Kobe Bryant’s death and why he believes that tragedy had such a strong impact on so many people. “Because it was such a shock, you know? And I think it just, for me personally, it really just brought home the fact that you just don’t know how much time you are going to have here. One moment to the next, something can happen. We all have our life plan. We have our vision, our goals, our strategy, the things that we want to do between now and whenever then is for us. But it really brought it home, like, don’t waste a moment, because I don’t know about tomorrow.”

What is it about challenging himself that motivates Mark Allen, and pushes his limitations to their fullest potential? “I love things that are challenging and not predictable, and certainly the Ironman is one of those. All of us line up on the starting line. There are all these guys from all over the world who have put every bit of effort that they have. They are getting ready because they want to be the champion. We all have the same singular goal. But none of us know how it is going to evolve, how it is going to unfold through the day because there are so many unpredictable things. The wind, the heat, the humidity how one guy’s move disrupts the entire pack of cyclists.”

How does Mark view the DNA of a champion? “For me what defines a champion’s mindset is when somebody is truly just there to give the absolute best that they can and they are not exactly concerned about what the outcome of the day is going to be like. But more, making each and every moment in that game, in that match, in that race count. When you do that you are just chipping away at possibility and you are putting little bits and pieces into this thing that at the end of the day might be this incredible success.”

Mark Allen talked about one of the biggest Ironman setbacks that he experienced during his career, during his 6th Ironman win, and how he overcame the initial issues. “Silence. That is a champion’s mindset because when you are quiet you are tuned in to everything going on. You stop judging what is happening. You stop looking at things as impossible and you re-engage. I realised, wait a minute, maybe I can’t win this. But I’m just going to give everything I have. I’m going to cross the finish line. I knew this was going to be my final Ironman and I thought, I at least have to cross that line with my head held high, knowing that I gave everything that I could. It just slowly evolved. Slowly I made up time. Actually I did catch Thomas Hellriegel at mile 23 of the marathon”

The 3 Principles of Ironman Success

Mark Allen defines the three principles of Ironman success, or any success for that matter, as being: clarify, adjust, and complete. He defines all three, and with clarify he says, “Clarifying the work that your goals are asking you to do to achieve the success that you are after. That will change you from being busy to effective, and certainly in the world of business being effective is very key. If you want to double your production you aren’t going to work twice as many hours. You have to  become more potent at what you are doing each and every moment.”

During this episode of Finding Your Summit Podcast, Mark Allen also talks about what was the most amazing example he saw of someone who broke barriers. “It was at this past year’s Ironman where I saw what was the most inspiring human being story ever at the race and it was an athlete named Rodrick. He was born with legs that eventually they cut the legs off above the knees. So, he is a double above the knee amputee.”

Posted in Podcast Episodes
← 137: Jack Kavanagh: Jack suffered a spinal cord injury but has overcome to have a fearless attitude by breaking personal boundries in every way.139: Jason Schechterle: Jason’s dream was to become a Phoenix police officer. 14 months into the job, he was hit by a taxi driver going 115 MPH. His car burst into flames and burned a significant part of his head + body. He feels blessed to lead the life he does and spreading tremendous positivity! →