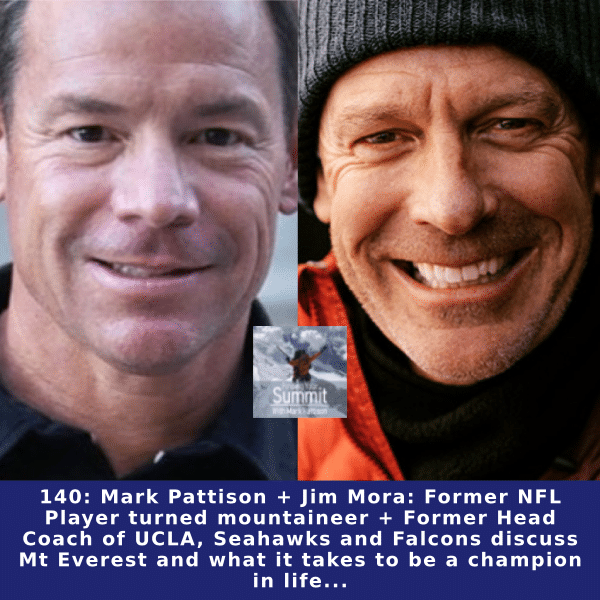 Jim Mora is not just an alumni who earned a living working in the NFL like Mark Pattison, he is also a personal  friend of Mark who met him in their senior year of high school in the summer before they went to the University of Washington. Jim discusses the positive attitude that Mark continues to carry. “I think this whole thing with Everest started when he was going through some changes, some extreme changes in his life. He was going through separation and divorce. He was struggling with his daughter Emilia, who he mentioned earlier, and her bout with epilepsy, which he is working hard to overcome. He was at a point in his life that wasn’t really bright at the time. Mark has always had a real positive outlook on things.” 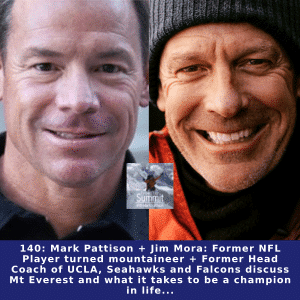 On this episode of Finding Your Summit Podcast, we talk with Jim Mora, Dad, Football Coach, ESPN Analyst, and Philanthropist. Jim discusses his own career as well as Mark Pattison’s evolution as a man and a mountain climber. “It is impressive how you stuck to it because a lot of people would start the journey, would get to a better spot, like you did, and then might say, I’m ok now, I’m good now. But your will to complete the journey, to complete the seven summits, to keep pushing for Emilia, to find your way out of the darkness, to invite happiness back into your life, to completely restructure everything about yourself has been inspiring. But anyone that knows Mark, would understand what I’m saying because he is incredibly positive about everything. It’s never a can’t. It’s always a can”

What does Jim see as Mark’s advance when it comes to mountain climbing? “Some people walk up a mountain. Some people attack a mountain. Mark attacks a mountain. When he gets on Everest he will be paying respect to Everest. But he will be in a mode where he is being safe. He is being smart. But he has a relentless attitude, and that is what you’ve always been. Relentless.”

Jim Mora tells the story of a special football player he mentored named Cody Ennis. “Cody (Ennis) went from a 310lb offensive lineman to a 185lb, now as a member of the United States Navy Seals team. I got a text from him two days ago. It’s a picture on my phone. I screenshotted it. He’s in a helicopter. He is in deployment, I believe in Afghanistan and he goes, ‘Coach Mora, I just want to thank you so much for shaking the sickness of complacency from me when I got to UCLA. I would never be where I am now without that. It just meant so much to me.”

Jim talks about the importance of loving the process that is involved in whatever your goals or journeys consist of. “People that are in love with the process find success. People that are relentless like you (Mark Pattison) they find success because they are doing it for the right reasons and what you’ve done Mark over and over is, and you said it, the top pyramid on John Wooden’s Pyramid of Success’ is competitive greatness is. And his definition of competitive greatness is, being at your best when your best is  needed.”

Jim shares how coaching felt when he went from the NFL to UCLA. “Coaching changed for me dramatically when I went to UCLA, the purpose of my coaching. The purpose in the pros was only to win. That is all they cared about in the pros, and the definition of winning was winning the game on Sunday. The definition of winning for me changed when I went to UCLA and certainly it was winning on the field because winning on the field allows you to continue to do what you love to do, which is coach these young men and help them in life. But it also became about these young men getting an education and graduating, which is two different things.”

Motivation comes and goes. But dedication can help you reach the peak of your personal summit. “Just take the next step. Just keep walking. Just keep breathing. Keep hoping and you will get where you are supposed to be, you know? And that is number seven on Kobe’s thing. Just keep going. You are going to get hit with adversity. You are going to get hit right in the face with things that challenge you on a daily basis and you can either turn around or you can keep going.”

During this episode of Finding Your Summit Podcast, Jim Mora also talks about how playing the blame game gets in the way of people taking responsibility for accomplishing their own prosperity. “I think it’s human nature when you have a failure, and I will just relate it to my job, when you are a football coach and someone fires you, your first instinct is to find someone to blame to relieve the angst that you feel. ‘It was their fault. It was their fault. Why did they do this? It was a bad decision.’ That is not productive at all. That is counterproductive and we all go through it. But the quicker you go through that and then turn the attention towards yourself and say, ‘OK, what decisions did I make that led to this failure?’