146: Rocky Bleier: Former NFL great who served in Vietnam, was shot and then hit with a mortar and then came back to win 4 super bowls for the Pittsburgh Steelers.

Rocky Bleier is from Appleton, Wisconsin, and was raised by his dad and lived above his family bar. “We also got a great coach which becomes important, a mentor, being at the right place at the right time, a guy by the name of Torchy Clark, who was a grade school basketball coach and had continuous winning records, got the high school job. He took a bunch of guys and in that period of time that we were in the conference we never lost a football, and we lost four basketball games. We became the number one team in the state of Wisconsin in football and the number one team in basketball.” 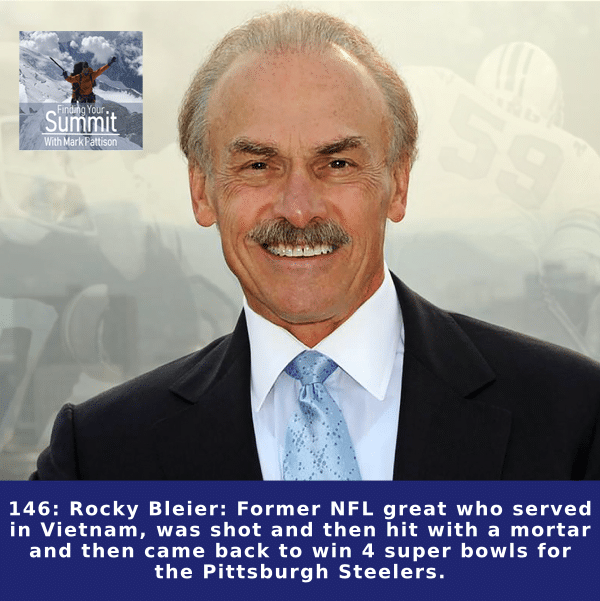 On this episode of Finding Your Summit Podcast, we talk with Rocky Bleier, NFL Running Back with the Pittsburgh Steelers, Owner and President of Rocky Bleier Inc, and Managing Member of Bleier Insurance Group. “All we can ask for in our lives is a chance and an opportunity and it is what you do with that opportunity and it is like the luck of the luck. Luck is based on what? Preparation, which means opportunity, it’s called luck.”

Rocky Bleier explains how it was possible that he made the Pittsburgh Steelers team after being selected in the 16th round of the NFL draft. “I really, truly believe that the reason was primarily the fundamentals that I learned while I was at Notre Dame, how to read defenses, more importantly, how to block, pick up blitzes, and the thought process on the running ball. I wasn’t a fast guy.”

What was it like to make it to the Pittsburgh Steelers and then get drafted into the U.S. Army? “I got drafted by the military, it was December 2nd, 1968. So, I got a chance to play 10 of 14 games. We were getting ready for the 11th game and all of a sudden, Boom, I got that draft notification report the next morning at 7am to be inducted into the armed services.”

Rocky Bleier paints the picture of when he got wounded during the Vietnam War. “I see a hand grenade flying through the air and it hits my commanding officer right in the middle of the back. You could see it in slow motion going over and over and over and boom! Hits off of his back, bounces off of him and rolls towards me and I’m but three feet from him and I get up to jump and it blows up and it blows up through my right foot, knee, and thigh and it gets him between both legs. Then we were in another fire fight until a platoon finally fought its way down. The enemy retreated, maybe because we either wounded and/or killed their leader. But they all of a sudden withdrew. Thank God for whatever reason that happened.”

Rocky expresses what it felt like to get shot. “It was like, adrenaline took over. You get shot. Bam! It was a hit. It was like somebody punching you as hard as they could in your arm or your leg, and the second thing is that when the grenade went off, it blew me up in the air, you know, and I came down. My first thought was, is everything alright? My leg was there. Ok, fine. My foot hurt. My knee hurt. A guy came over. Nobody could give you anything. Nobody could give you a morphine shot at that time.”

Rocky Bleier shares a highly emotional story of revisiting Vietnam 50 years later where he was shot. “Wow, all of a sudden Mark, out of left field I get this emotional reaction from the bottom of the soles of my feet. I could just feel it coming up through my body. I’m confused. I don’t understand where it is coming from or why. It’s there. There is nothing that triggered it…except for the question of, how do I feel? I couldn’t help myself. I started to cry. All of a sudden I became kind of sick. It was like it was flushing my system.”

From the Battlefield to the Football Field

Coming back to football wasn’t as easy as it may have seemed. “I asked if I could go to training camp. Maybe I went back too soon. Who knows. And it took its toll and it took its beating. They kept me to the last cut. Chuck Knoll said, ‘We release you. Go home. Go do what you need to do. Come back next year. We will give you another shot at this. The next day I got a call from Dan Rooney who was then the president of the football club and he said, ‘I’m sorry I wasn’t there.’ He said, ‘I talked to Chuck. We aren’t going to take any room in his roster.’ He said, ‘But, we’re going to put you in injured reserve. I want our doctors to take a look at you again, and I think maybe there is something they can do. Hopefully you can help us at the end of the season.’ So, they bought me a year.”

Playing for the Pittsburgh Steelers

During this episode of Finding Your Summit Podcast, Rocky Bleier also talks about the importance of recognizing your talent and personalized skillset. We all have a talent, of one nature or another of how we can achieve and get to that point, and you have to understand what that talent may be. Different from anybody else’s. But, it is yours, especially in what you do with it. Because of that one talent, my life came full circle. I got that opportunity to play and end up on one of the all-time great football teams.”