149: Tracy Perlman: Tracy is the SVP of NFL Communications and Marketing. She has been a huge part of developing the NFL Legends community while becoming a force within a male dominated sport. This is all about Girl Empowerment…

Tracy Perlman has had multi-facilitated and invigorating career in the National Football League. She talks about her navigation process, going from college to the NFL. “I started at the NFL the day after I graduated from college. It was literally my 22nd birthday and it was the day after graduation and I walked into an office. It felt very ‘mom-and-pop.’ I say that meaning, it felt like I walked into a family atmosphere. When you start at the NFL working where I did, I worked in HR, and people say, you worked in HR? But the job was called a ‘floater.’ So, I was able to work in every department at the NFL over a span of 10 months to try and really understand it, and a floater was essentially a temp. So, whenever someone was out I would sit in that department and work in that department for however long necessary. So, for me, it was a learning experience and I got to really understand the NFL, the way that it functioned, what all the departments are.” 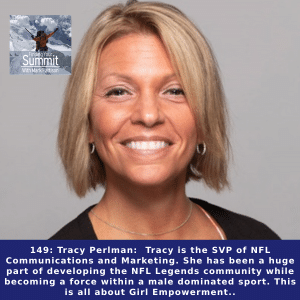 On this episode of Finding Your Summit Podcast, we talk with Tracy Perlman about the expansion of her career at the NFL for over 27 years, in such a massive economic ecosystem. “I don’t think people understand how much it takes to put on the National Football League. You’ve got a PR department. You have a media department. You have NFL Films. We didn’t have the network or the website at the time, because it was so long ago. You have an HR department. You have a broadcasting department. So, I was able to work in all of these areas and sort out where I really wanted to be. The thing about the NFL is, if you are passionate about what you do, and you really care about it, and you are learning every day, there is a way forward all the time.”

What made Tracy Perlman zoom in on the marketing department? “After working for NFL Films for a while, working for NFL Enterprises, I ended up working in the Marketing and Sponsorship department and working on a lot of different things. I started to aggregate all of these things that no one was handling. So, we took over some of the promotional stuff. All of a sudden, who is doing all of the player appearances? Wait a minute, who is doing all the hospitality? We started to build this entertainment marketing area, and within entertainment marketing, I got to do everything from product-place merchandise in movies, to running the Draft Day movie, to the Broadway show Lombardi. But, I also started to work a lot with NFL players, both current and legend. As I started to do that, I realized, that is really where my passion was and working with players that inspire people every day. People don’t understand, a player is fighting for his job every single day.”

Tracy Perlman talks about the reverence she feels about working to create the NFL Legends Community. “The thing that I am most proud of is building the Legends Community. Not booking YouTube for Super Bowl Halftime or any of those other things. It is really building a program where I got to work with legends, where the NFL started to build a partnership with players, because we should be celebrating and honoring the men who built the game.”

What are some of the elements that make up Tracy Perlman’s sense of mission and purpose at the NFL these days? “I now run the entire player vertical so that once you have an engagement with the NFL, regardless of how old you, we want to make sure that you always have the best experience you can ever have, and that means, whether you are 6-years-old or 60-years-old. So, we want to make sure that when you start playing the game, being a fan of the game, that your engagement with the game is inspirational and something that you are always proud of.”

What is the focus behind the NFL Legends Community? “What we wanted to do is make sure there was continuity. We never wanted a guy to feel like the door closed. Our thought was, ‘once a player, forever a legend,’ and we decided that we couldn’t just create something. So, we brought 24 people who played the game to New York, including Chad Pennington, and Leonard Wheeler, and John Randle, and we sat in a room for six hours trying to sort out, what is this? The more we began to talk, the more it became completely apparent that the NFL’s relationship with legends was transactional. At the time, I think we were calling everybody ‘former players.’ It was transactional. It was, I have an appearance. Do you want to do it. Here is money, and then we probably wouldn’t talk to you for quite some time.”

From ‘Former Players’ to ‘Legends’

Tracy Perlman defines what makes the members of the NFL Legends Community elite. “The way we structured it was really to celebrate, engage, embrace, and communicate with every former player we could talk to, and the reason why we called it The Legends Community is simply because every player who has ever played this game at the highest level, is the top 1% . So, if you think about 100 years of NFL football, and only about 14,000 guys who played two or more seasons, and maybe 25,000 guys who played total, that is the top 1%. So, we wanted to make sure guys felt special. Which is why the word ‘legend’ is where we ended up.”

During this episode of Finding Your Summit Podcast, Tracy Perlman also explains the ways in which the growth of the NFL Legends Community truly exceeded her expectations. “We are actually at 10,300 registered legends in the community, and the thing about that that is important is they are actually engaging. Meaning, we send out a newsletter monthly; 70% open rate on the newsletter. Anybody who sends out emails and newsletters will tell you that is extraordinary. Last year 4300 legends went back to team events, 4300 guys. So, we are seeing the guys really engage. All of the use of every program has gone up. So, again, for us the idea is to help the transition out of the game to make sure that you understand the information, to make sure that you know that you can engage however you want, and to ensure that once you are engaged with us, we keep giving you relevant information and that it is clear.”