150: Ed Rush: Ed Rush is a former Top Gun pilot who now speaks to milions on what he learned about vision, clarity & mission. Great conversation as we deal with the Coronavirus and what we can all do…

Where did Ed Rush’s qualities of vision, clarity, and mission really begin to kick in? “My number one goal in life is to fulfill the calling that I feel like GOD has put me on this earth to do, and so I wake up in the morning with ‘mission’ on my mind. That is why I think that the military was functionally such a good place for me. It wasn’t always easy. I failed kindergarten. I don’t like admitting that fact, frankly. But, it is a fact that I wasn’t always the sharpest tool in the shed growing up. Got in trouble quite a bit. But, I found my way into the marine corp, found my way into the cockpit of the F-18. So, something went right. Yeah, mission was really, and still is really, a big part of the driving focus behind my life.” 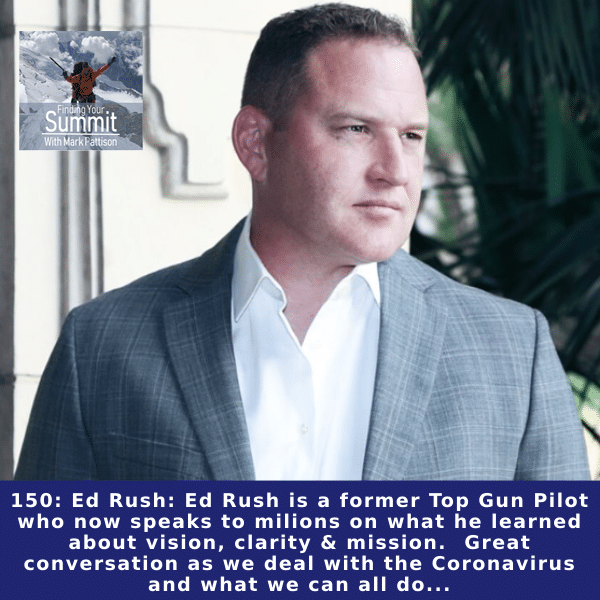 On this episode of Finding Your Summit Podcast, we talk with Ed Rush, CEO of Ed Rush & Associates, Speaker, Advisor, Author of The 21-Day Miracle, Speaker, and Marine Corp Fighter Pilot from the Top Gun program. Ed Rush opens up about two of the most important mentors in his life, his father who was a basketball referee in the NBA, and his mother, who is in the Basketball Hall of Fame as a basketball coach. “1972, the year that I was born, she (Ed’s mom) was coaching a small Catholic university in Pennsylvania, their girls basketball team, and they were awful until my mom showed up. The year she showed up they went to the national championship, and the next year they went to the national championship and won, and that was the year she was pregnant with me. She went on to win three national championships.”

How did the Marine Corp prepare Ed Rush for the fly that he is able to live right now? “I went into the Marine Corp and had this amazing group of mentors, starting with drill instructors, who I thought hated me. But, I found out later on that they were training me to live. Like, they were teaching me not to die, you know? Then I had flight instructors, who I thought hated me and I found out that they didn’t hate me, they loved me, to the point of which they weren’t going to let me make mistakes. Really, all those things put together, turned me into a good human being, and a good dad, and a good husband, and a good pilot, and a good speaker.”

What is Ed’s perspective on making mistakes and gaining an acute sense of focus? “The interesting thing about flying airplanes, and it is true for life, is that it is not so much about not making mistakes. Pilots, by no means, are not flawless. It is just what you do with those mistakes. I think that most pilots would admit that every flight is a constant adjustment, every little move. When you are dogfighting for example, you are turning at about 60 degrees-per-second. Every single move, every twitch, requires a second adjustment after that.”

You will get to hear Ed Rush share personal stories of what it took to learn how to fly and land airplanes during his Top Gun flight training. “I landed, and as I rolled out of the aircraft carrier I breathed this big sigh of relief and realized that I was alive. Now, I would love to tell you that I was alive because I was the second coming of Iceman, Val Kilmer from Top Gun. But the truth is, I’m alive because of a really great idea taken into implementation, and the truth is, I’m alive because of training. We were talking about just the pure discipline of just getting it done. Sometimes training is nothing more than repetition.”

Ed Rush offers a great comparison between seeing the reflection of stars and the curve balls that life can throw you every day. “When you fly out over the ocean, especially if the ocean is fairly calm, the stars actually reflect off of the ocean and it gives you this parallax that you, for a moment, your brain thinks, man, I must be pointed directly up. So, there is a lot of pilots that actually push their airplanes down, thinking that the ocean that they are looking at are actually stars.”

Ed looks at the down time during the global coronavirus quarantine as an opportunity for people to either get lazier or get better, and why some of the best growth opportunities take place when you are terrified. “I remember when I was a freshman in high school, I showed up and there were all these seniors there, and I’m like, you got to be kidding me. I’m going to smash into all of these guys? Pushing through that terror is what made you catch that ball in that big game. People think, oh man, you must feel a lot of pressure when you are out there on the big stage. No, you don’t feel the pressure when you are out on the big stage. You feel the pressure when you are getting your nose slammed by a guy that weighs a hundred pounds more than you in the first practice.”

Life After the Marine Corp

What made Ed Rush change his mind about flying airlines after being a fighter pilot? “Most fighter pilots end up flying for the airlines. It is easily one of the strangest transitions that I can imagine. You have these guys and gals that are the tip of the spear, trained at the super high level, massive reactions, incredible discipline and training, and then they go off and basically fly a bus for the next 20 years. I don’t mean to be disparaging about that. But, I will just tell you, a lot of thanks goes to my wife. I was getting out of the Marine Corp in 2006, and I was sitting on the couch and I had already put in applications for UPS, and FedEx, and some other airlines, were on the way to try and get an airline job, because that is basically what everybody did. In the middle of a movie that my wife and I were watching she stops the movie and she looks at me and says, is this really what you want to do? I had actually never thought about that question until she asked me, and I go, actually ‘no.’”

During this episode of Finding Your Summit Podcast, Ed Rush also explains why he believes that the changes we have to make in life and in business are similar to a missile: “When you watch a sidewinder missile, it actually moves, it is always turning on its way to the target, making smaller and smaller corrections as it gets closer. But, as it is in business, in life, in achieving your goals, two things happen. Number one, you never start the right way. You always start in some direction on the way. But, it is never the right way. The second thing is, the target begins to move.”