151: Jim Mora: Former NFL and College Head Coach Jim Mora talks about putting yourself in the best position for life after Covid-19 when we all emerge out of this virus

Jim Mora opens up this episode by addressing the COVID-19 pandemic that has impacted all of our lives, and he shares some advice on how to manage our expectations while staring ahead into the unknown. “I believe as human beings there is a strength to us that allows us to overcome and I think this concept of embracing uncertainty is very difficult. It runs counter to who we are and what we believe. But, it is so important right now, because if you don’t embrace uncertainty and look for the good in what is happening, you are going to spiral, and I see so many great things happening.” 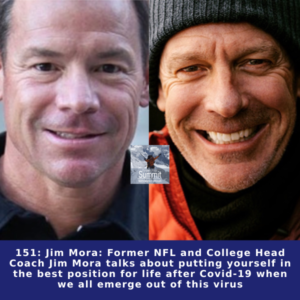 On this episode of Finding Your Summit Podcast, we talk with Jim Mora, 25-Year NFL Former Head Coach, Assistant Coach, and Defensive Coordinator. Jim Mora talks about how adverse situations reveal who we are when we come face-to-face with them. “Adversity turns weak people into victims and strong people into competitors. We all are going to go through adversity, different types in our lives, different levels. But weak people shrivel, you know, lay on their couch and watch TV, or hide or look for an out, and it takes a strength of character to compete in adverse times.”

Jim Mora believes that our attitude and mindset are key factors when it comes to experiencing hard things. “I think I’m like everybody. I have some really good days and I have some really challenging days. The fight is to always work through those challenging days and make sure the next day is a better day, and I have always been a ‘glass is half full’ guy. But sometimes that is hard when you get fired. I got fired at UCLA.”

Why is coaching so important to Jim Mora in his life?  “I don’t know what is up next for me. I hope that it is coaching. The reason I love to coach is that I love to have an effect on people. But if it isn’t coaching, it will be something else where I can influence people.”

How did the NFL superstar of the San Francisco 49ers Ron Lott’s champion-level approach to playing football transition over to his approach to life? “I will say this about Ronnie, I got the great pleasure of meeting Ronnie when I was in high school. My dad was recruiting him at the University of Washington and he ended up going to USC. As we all know, great career there, great career in the NFL, Hall of Famer, now a great businessman. You know Ronnie. Ronnie never compromises his standards, and I think that is one of the things that makes him so successful. That doesn’t mean he can’t be fluid and he can’t be flexible. But, he doesn’t compromise what he believes in, and what he believes in has worked for him. He treats people with great respect, with dignity. He is always honest.”

Pressure is a Privilege

What is Jim Mora’s key advice to people that are making the transition from high school to college? “It is still considered a game. But you have just entered into the world of business, and the expectations and the demands that are going to be put on you are far greater than any you have ever had in your athletic career, and I say, embrace that. I say, it is a lot of pressure. But, pressure is a privilege. You have attained something through your work ethic, through your talent, through your attitude, your mindset, that has allowed you to get a scholarship to go play college football, and there is a lot of pressure with that. But, man, what a privilege it is to be in that situation.”

During this episode of Finding Your Summit Podcast, Jim Mora also talks about the commonalities he noticed that the greatest NFL football players hold dear. “In my NFL career, I was fortunate enough to be around. I believe it is 30 members of the Pro Football Hall of Fame, and they were all talented. Everyone in the NFL is talented, has physical gifts. But what made the great ones great and what made the great ones Hall of Famers, was their mindset, the standards they held themselves to, and the standards they held other people to, the work ethic that was beyond reproach, that once again, they never compromised. It was just part of their being.”