159: Rony Seikaly: Former NBA Star Rony Seikaly talks about his time growing up in war torn Beirut and then finding his way to the states

Rony Seikaly discusses his personal background and where he is from. “I was born in Lebanon and we left Lebanon at an early age when the civil war broke out. My family moved to Greece. That’s where I grew up. I was in Greece, and from Greece we came to the U.S. and I just stayed here and my family just went back to Lebanon.” 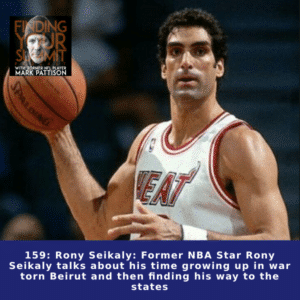 On this episode of Finding Your Summit Podcast, we talk with Rony Seikaly, Former NBA Basketball Player for the Miami Heat, Golden State Warriors, Orlando Magic, and the New Jersey Nets. Rony Seikaly conveys what the transition was like going from Beirut to Greece? “I actually told my daughter the other day, you know the panic and the hysteria that was going on last week with people aiming themselves and the looting, and people scared. They are not sure what is going on. That mass hysteria, closure of banks, and no government, and that is what you grew up in. That was your everyday kind of life.”

Rony explains his initial reluctance to playing basketball. “As I got a little bit older and went to an American high school in Athens, Greece, all my friends were telling me, you know, it’s a shame, the only sport that I wasn’t playing was basketball, because I didn’t want to just play basketball because I was tall. I didn’t want people to think, oh, he is a basketball player just because he is tall. I didn’t want to be that guy. I was already excelling in other sports like soccer and tennis and all the other sports. So, I didn’t really want to be that goofball, the tall guy on the team basically.

Was playing professional sports a dream for Rony as a little kid. “I would have never guessed how I ended up or how I got into the NBA. I think it was a series of luck and being at the right place at the right time with the right people. It just happened organically. I wasn’t looking for it. But that was my path.”

The Magic of Michael Jordan

What was it like playing against Michael Jordan? “Michael Jordan had an aura. He was different. He was not just another great player. He had something different He had a little sparkle that was on the court. Somethings you just got caught watching him because you are mesmerized but what this guy can do, and this is in the era of the 90s, there was a rule, if you can keep teams under 90 points you are going to win the game. It was all about defense. There were no easy layups. They would take your head off, and he did what he did during the 90s when the defense was two-hand checking.”

During this episode of Finding Your Summit Podcast, Rony Seikaly also talks about always having an architectural and artistic mind for music and design, even selling his first home to Shaquille O’Neal. “This is something I always went to, even during my NBA career. I would have a subscription to all of these beautiful homes in the world and I would always take pictures of beautiful things I would see in homes that I would visit. When you are in the NBA, you get access to amazing homes.”