187: Mike Schauch: Hear an amazing story about a guy who followed his heart to find the right karma in Nepal and pay it forward. Incredible tale….

When did Mike Schauch begin to get attracted to the Nepal region? “Since I was about 15 I had wanted to go to Nepal. I don’t know what it is about Nepal. But it is just the people, the culture, the mountains of course. Something just drew me, connected with me right in my heart. I have always had this desire to go there. But I remember actually when I was 15 my sister gave me this “Lonely Planet” book and I just remember it was all about trekking in the Himalayas. I remember getting it for Christmas and just tearing through the pages, and I couldn’t even read anything because I was going through it so fast. All I could think about is running out of my house in my pajamas with this “Lonely Planet”book and going to the Himalayas.

Listen to “Mike Schauch: Hear an amazing story about a guy who followed his heart to find the right karma in Nepal and pay it forward. Incredible tale.” on Spreaker. 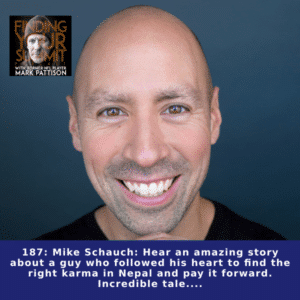 On this episode of Finding Your Summit Podcast, we talk with Mike Schauch, Mountaineer and author about his experiences in Nepal. “It wasn’t until I was in my early 30s before I finally went to the Himalayas. I got to Nepal. Part of the other thing was I never really knew what I wanted to do there. Did I want to climb a mountain? Which mountain? Did I want to go to the Annapurna circuit? But one of the things that I really felt strongly about was just to go somewhere, have an experience off the beaten path, right? And Nepal to me was this kind of mystical, magical place. Maybe I was overly romantic about it. But that was just the kind of feeling I had.”

What got Mike Schauch excited about heading out to the Nar Phu? “In 2011, we were sitting down with a gentleman who had just gotten back, he had been trekking through the Himalayas for two decades, and he was telling me about this one little valley called The Lost Valley of Nar Phu, and this valley had just been opened up a few years before that. Prior to that it had been closed off for generations. So, the people had been living very much the same for the last 800 years, and he was just showing me his pictures, and I thought, this is it, this is amazing. This is where I am going to go. My wife and I were sitting there and it was just a decision we made onto itself.”

What was it like for Mike Schauch traveling to The Valley of Nar Phu? “We went into this valley. We just had a beautiful experience. I mean, this valley going in there was like stepping back into the 17th century. The people there were just so genuine and so connected to their ancestral roots and again, their traditional ways. There is no electricity out there. To get to the valley, it is about a week trek.”

Mike Schauch talks about some of the fascinating things he witnessed in the Himalayas. “We spent two days doing reconnaissance, trying to find this mountain. I was with two sherpa guides. They thought we were trespassing into Tebet because we were going into these obscure valleys, and just saw some of the most amazing things. These herds of bharal, which are these Himalayan mountain sheep, hundreds of them coming down the hillside, things like that. The glaciers, these massive canyons of glaciers are just unreal. We came into contact with snow leopard tracks and things like that. It was just the three of us out there. It felt like we were suspended in time.”

What was it like trying to climb the pyramid-shaped mountains in the Himalayas? “As we were making our way closer to the mountains, the more things started falling apart. We were caught in a snowstorm at 17,000 feet. My gear bags with my climbing gear, the mule that was carrying it took off and it was two days behind us. All of these things started unraveling and it forced me to hunker down in this remote outpost, the most remote outpost village in this valley.”

Mike Schauch shared some of the differences in life for young people during his trip. “I learned a lot about the ways of village life. I mean, kids, by the time they are six or seven-years-old, they have to start working in the fields. At that time, girls 14 or 15-years-old, they’d get married, start having families, kids of their own. So, again, all of these thoughts were floating around in my mind. So when I discovered that Nar, the village has this little school, I thought, let’s go check it out. Let’s go see what’s there. Maybe there is some hope for these kids.”

Communicating in the Village

How were they able to communicate in the village? “One of our sherpa friends, we had to send him up with a letter because we still had to get the parents’ consent, and obviously Karma would have to go to boarding school. She would have to leave her village. So, he had to take a full bus ride and hike for five days to deliver a letter  and then reverse it on the way back. Her parents were thrilled and they were very happy about it, and they totally agreed that this was the right thing. That was back in 2012 and over the next eight years we have been going back to Nepal every eight to ten months and growing our relationship with Karma.”

Giving Back to Nepal

During this episode of Finding Your Summit Podcast, Mike Schauch also talks about the other kids that he and his wife have been able to help in Nepal. “Chantel and I, obviously we have a connection with Karma and Pemba, and their sister Palma is the next older sister for Karma. We were able to take care of her as well with the education. Then we have two more girls that we are supporting who actually got scholarships to come to Canada and one is doing her pre-med now at Trent University. So, that is kind of our focus. But the larger focus than that is the school, the SMD school.”