How did guest Rob Urbach get involved in competitive sports? “I’ve worked in the sports business my entire career. But I was a triathlete. So, I did Ironman Kona at age 19, was the second youngest guy to do so. I could feel some of what you put into your endeavors from a passion and fundraising standpoint and relate it to that. Somehow that race, I read the Sports Illustrated since I was in high school, and thought, gee, I want to try that. I knew nothing about triathletes. I didn’t know a triathlete. But I figured out how to do that and raised money for the American Heart Association along the way.” 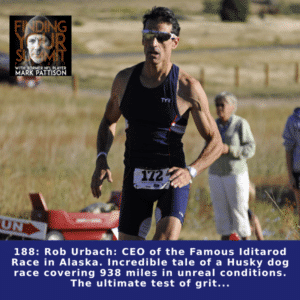 On this episode of Finding Your Summit Podcast, we talk with Rob Urbach, Chief Executive Officer of the Iditarod long-distance sled dog race in Alaska about the differences between competing in the Ironman Kona and the Iditarod. “They are both extraordinary endurance events. They both are complex. They both have some risk to mitigate, and I knew very little about dogs and mushing, and even Alaska at the time. But I knew about events, and media, and what it takes to really enable a passion. So, if you think about someone doing an Ironman and someone doing Iditarod, there are a lot of similarities. But there are big differences. At the Ironman, at the end of that day, it is a long, all-day workout. But, you are going to get a bed, a shower, a massage, a nice meal, and warmth. Not so at Iditarod.”

What is it like being out in the Iditarod race? “The weather changes are extraordinary. The issues, you have to manage your dogs first. Just to get through that, largely it is an unsupported event across the Alaskian wilderness, off the grid. There are no roads. There is no internet access. There is no service. You are camping out. We are supporting them for safety and from a dog care standpoint. But these guys are on their own.”

Rob Urbach explains how each Iditarod team starts with 14 dogs. “They are mixed breeds that are purposely bred for their exercise physiology. These dogs are just aerobic specimens machines. They can go 120-130 miles a day without any problems. So, what you are doing is, it is you and your dog team, your 14 dogs. You are responsible for feeding, snacking, taking care of those dogs along the way. The stops are primarily about dog care. So, they have to stop and do a mandatory vet check. Sometimes the stop is only five minutes. Sometimes there is rest.”

What does it take to succeed in Iditarod? “I think you have to be the kind of person that can function on massive sleep deprivation because I think they are sort of sleep deprivation ninjas.  Some of the winners have told me they’ve averaged an hour and 45 minutes a day for 10 straight days. So, they are dealing with those issues because when they stop, they have to feed their dogs. They have to keep making sure that their dogs are eating properly, etc. And they have to decide, just like if you are an offensive coordinator, which dogs do you move around? Do you put the dog in the sled and rest that dog?”

What type of safety precautions are put in place during the race? “Last year we had 57 starters, 24 did not finish. We had three pretty dramatic blackhawk helicopter rescues. So, typically they are out there on their own. But the safety protocols are that they carry an SOS button. There are two buttons on there. One, I am in trouble, not life or death. Come get me. But you don’t have to scramble your rescue air helicopters. The other button is come get me now.”

Rob Urbach discusses the level of commitment that many Iditarod racers invest.“I think you are talking about people who are dog people, number one. They will have a kennel. Typically, some could have between 50-100 dogs, and they will know not just the names but the idiosyncrasies of each dog like you would your kid, and their ability to relate. Some of them are more comfortable with dogs than people. They are just so focused so intensely with that relationship.”

The Meaning Behind Iditarod

Rob Urbach talks about the early beginnings of the word Iditarod. “Iditarod is roughly a halfway point. It is an old mining town back in 1908, I think gold was discovered in Iditarod at one point. That started the rush of settlers to Alaska, 10,000 people. It is a ghost town now. No one lives there except when we’re there we set up the ghost town camp.”

During this episode of Finding Your Summit Podcast, Rob Urbach also talks about the typical lifestyle of an Iditarod race dog. “I think that every dog would have the inspiration to be an Iditarod dog. They live a pretty good life. They get to hang out with their buddies. They are on a team. They get to see the Northern Lights all winter long. They get to go on journeys, and if any dogs have an abstract thought, you can see the joy in their body language and how they are emotive.”