189: Lakpa Rita Sherpa: He has summited Everest 17 times and was the first Sherpa to ever climb the Seven Summit. Fascinating story.

How was it for Lakpa Rita Sherpa growing up in Thame in Nepal? “It’s a small town. We all know each other. I grew up with eight siblings. My parents gave birth to 11 kids, three didn’t survive. But eight are still surviving. My dad used to be a mountain guide as well. My dad didn’t get an opportunity to go to school because by then when his generation was growing up there was no school existing. The school I went to was built by Edmund Hillary after he submitted Everest. It was founded in 1960. I was born in 1966. So the school was just born six years before I was born.” 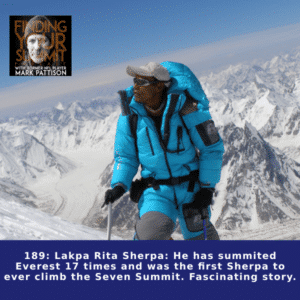 On this episode of Finding Your Summit Podcast, we talk with Lakpa Rita Sherpa about his early days in Nepal and eventually becoming an extremely experienced sherpa. “I had any opportunity to go to school. But I never got a chance to go to college. My parents, like I said, they gave birth to 11 kids and three didn’t survive; eight were still alive. My father was the only source of income to support the kids, all of those kids. Then after I finished my high school, 1984, as being an older son, I had to take over to help to support the family. Basically, my father got a frost bite when he was climbing and he was no longer able to do what he used to do.”

Listen to “Lakpa Rita Sherpa: He has summited Everest 17 times and was the first Sherpa to ever climb the Seven Summit. Fascinating story” on Spreaker.

Did Lapka Rita Sherpa grow up with electricity in Nepal? “No, we didn’t have electricity at all by then. We used kerosene lamps and then we used plywood. So, when I was a kid, when I wasn’t going to school I would be out in a jungle collecting dead firewood for us to use for our fuel sources. Then during the night, kerosene lamps, or those that can’t afford, they use a pinetree, which is to burn. So, they use that as a lamp by then, which was pretty tough.”

How do you grow things at 12,000 feet? “We still grew some stuff there. During the summer we get one crop a year, which is basically potatoes, and spinach, and chives. Those are pretty much what we grow. In some places we grow buckwheat which is also crops. It’s all that we grow and we keep animals, yaks, for basically trading to Tibet for milking or for meat as well. There is a market in Namche, which is basically a three or four hour hike from my hometown. So, every Saturday there will be a market where you can trade for whatever you don’t grow.”

What was his big break to get on an exhibition team to actually go climb Mount Everest? “It was very much an inspiration for me when Sir Edmund Hillary and his sherpas would visit our schools. They used to visit our schools once a year during those days, and I always wanted to follow things in footstep with my dream. The other thing like I say there was nothing else that exists or that I can do by then. So, it is very important for me. I got an opportunity to do that with my cousin. My uncle was leading an exhibition to Everest in 1984 and I got an opportunity to work with him. He provided me a job without having any experience.”

Lakpa talks about his exhibitions in 1984 and then 1990. “By then the commercial exhibitions were very rare. There were only a few commercial exhibitions. So, it is too hard to find a job. But I was always keen to work hard, try to do my best, and since I had been to school a little bit, I spoke a little bit of English, not as good as today, that helped me too. So, I got an opportunity again in 1990, which is a Yugoslavia team. My English was pretty good between all of the sherpas that were working for them. They chose me to work with them, route working, fixing lines, and stuff like that.”

What are Lakpa’s responsibilities at Alpine Ascents aside from working as a lead sherpa? “I do the bookkeeping, managing all of the expenses during the exhibitions. I’m also responsible for hiring all of the sherpas who work for Alpine back in Nepal.”

What was the connection between Lakpa Rita Sherpa and Todd Burleson, the president and owner of Alpine Ascents? “The first time was 1990, even before I summited Mount Everest. I got an opportunity to work with Todd. Since then, we have become very good friends. Since then I have always worked with his exhibitions. He treats me very well and we have become very good friends. Then in the year 2000 he gave me the opportunity. He says, ‘Do you want to come to the U.S. and work for us?’ This was a great opportunity. I was a little bit scared by then too because I never thought that I would be. This is a huge country.”

Before Climbing the Everest

During this episode of Finding Your Summit Podcast, Lakpa Rita Sherpa also shares advice for anyone looking to summit Mount Everest. “Like you, you have done a lot. You have climbed so much, which is a great help. But, in the world, there are some people who haven’t put a clamp on their thinking to climb Mount Everest, which I would say is wrong. Before you go to Everest you should train hard. You should practice with a little mountain. All of these mountains will teach you so many things.”