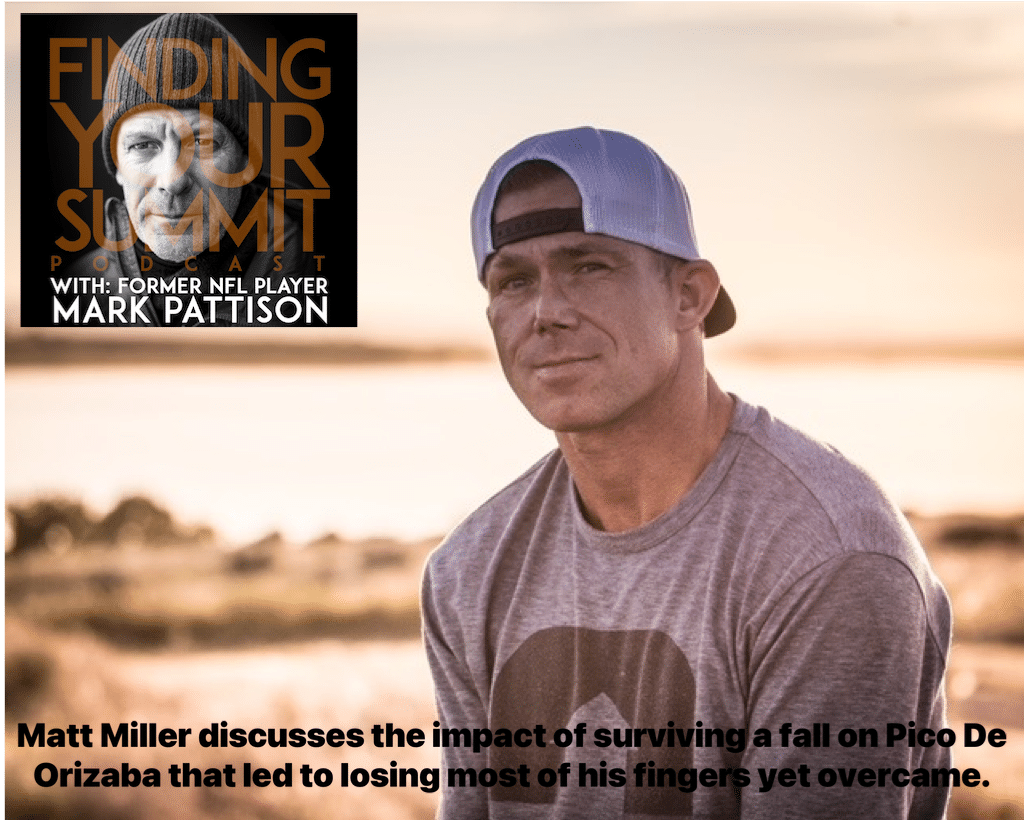 Matt Miller discusses the impact of surviving a tumultuous accident on Pico de Orizaba that led to losing most of his fingers yet overcame and is changing lives for the better.

Today’s guest Matt Miller discusses his athletic background. “I was a 22-year-old kid. I played college baseball at Santa Clara University. So, I grew up an athlete and I grew up here too in Phoenix with a really special relationship with my father. We grew up in the outdoors. I was so blessed. We went to Alaska every summer. Just incredible tales with my father. We probably should have died a long time ago. But as you know Mark, it always works out, it seems like, until it didn’t.”

On this episode of Finding Your Summit Podcast, we talk with Matt Miller, Founder of Klarity Lifestyle Company, Outdoorsman, Ultra Runner, Baseball Enthusiast, Writer, Speaker, and Coach, about his life leading up to the big climb in Mexico. “I graduated from Santa Clara. I didn’t get drafted. I think I enjoyed life a little too much my senior year, and I came back, and tried to figure life out. My father asked me to go on this climb. He had gotten into mountain climbing while I was away at school. He had done the Tetons. But nothing major, nothing like what you are doing. Of course I was going to go along. What a great way to get away. I had eight months in the real world since playing baseball before this trip.”

Matt Miller talks about climbing Pico de Orizaba, a volcano outside of Mexico City. “We go and this is November 22nd, 2002. We stayed at base camp, which is about 14,000 feet. They dropped us off there and the idea was we would spend the night in this camp and you wake up at about two in the morning and push to the summit. The first three or four hours are walking through a volcanic spree before you actually get to the glacier. We woke up, I will say this, nighttime, there was one window in this little hut we were in at basecamp. It happened to be a full moon.”

Matt Miller discusses traveling up the slippery Glan Glaciar. “I remember getting to the glacier, we bent down and put our crampons on and that was a really vivid memory for me man. I remember looking down and tying my shoes and that was the last time I ever tied my shoes with my fingers. I can still remember it like it was yesterday.”

How did Matt’s fall take place? “About an hour into the climb, my father had altitude sickness and wasn’t feeling well. So, he started dragging behind everyone. I stayed with him and kind of just walked directly behind him and kind of let him walk in front of me at a slower pace. That way, if he fell or something went wrong, I could drop to my knees and try self-arresting and get on him. It was so steep. We felt that if someone went, it would just take everyone. It was almost too dangerous to rope. We were about 200 yards short of summit. The rest of our team had already made it. We were moving pretty slow and he slipped and fell.”

Matt Miller opens up about the extent of the injuries he endured. “I kind of went limp. Which is probably why I didn’t break anything. But I slid on my face. So, not only was I beaten up, my nose was all the way off. My ear was hanging off. My ribs were all broken and probably the most terrifying thing was I was blind from all of the swelling. My head was about the size of a basketball. I couldn’t hear anything. I couldn’t see anything. I could hear somebody moaning. I remember I asked dad what happened. I don’t think I ever heard my dad swear. He said, ‘Don’t f*cking move. I will never forget that. I knew it was real.”

How did therapy unfold for Matt Miller’s injuries? “For me, they were waiting for this swelling to come down. At that point, they would just basically do debriding, looking at all of my wounds and cleaning things out. My fingers, it was that first day in Mexico City that I noticed my fingers were really, really white, and I noticed that nobody was talking about them. I had asked the doctor twice and he kind of ignored me and moved on. No one had said anything. So, it was my third day in Mexico City, I’m coming up from a bath actually, and I’m moving my fingers in and out, just looking at the skin on my ring and index finger slops off.”

Frostbite played a harmful role in hurting Matt’s hands. “The life-changing thing was saving this, the thumbs. If they didn’t save any of my thumbs, I would have been doomed. To fill that part in. I had the fingers still on here when I got back to the states. They were just white. They were turning black. The plan was to wait for a month and see where things shook out. You can imagine, there aren’t a lot of frostbite specialists in Scottsdale (Arizona).

During this episode of Finding Your Summit Podcast, Matt Miller discusses running the Leadville 100 and partnering up with K2 Adventures. “I remember it took a half an hour to tie my shoes the first time. But it was important that I learned. That was pretty much the core of my work out for the first week was tying my shoes. Then it turned into a mile, then two mile, and three mile. I became a runner. As you know, I think you know, I’m running Leadville 100 in August. I’m running Leadville and I partnered with a group called K2 Adventures, an amazing group. They help people with disabilities do incredible things. So, they led the first blind guy up Everest.”