Oz Sanchez discusses the ways in which he has overcome a spinal cord injury after a painful motorcycle accident in 2001, and has advanced his competitive spirit with two wins at the Paralympic Games, in 2008 and 2012. 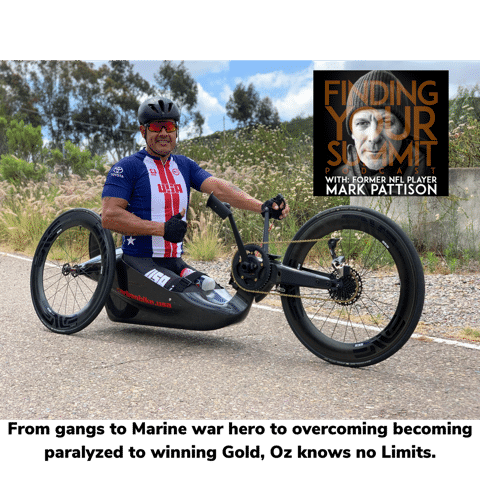 What was it like growing up in Oz Sanchez’s version of Los Angeles as a kid? “My parents were first generation immigrants into the States. Despite having no education, no prior experience wanted to raise their family in a typical American Dream. So, never-the-less, they did the best that they could. But there were a lot of stumbles and falls and what not. My dad worked pretty much seven days a week, 12 hours a day, for a large part of his career while we were growing up.”

On this episode of Finding Your Summit Podcast, we talk with Oz Sanchez who opens up about internal struggles that his mother dealt with. “My mother was a stay-at-home mother. Mother had a lot of childhood trauma. She was severely depressed. I recall she attempted suicide once and I walked in on her while she was bleeding out in the bathtub. I’m somewhere between 8-11 years of age. Much of my childhood, because of this trauma and my mechanisms to survive in this environment, was my blocking out memories all together. So, much of my childhood experience is almost a blankslate unfortunately. But we did the best that we could.”

What was Oz’s relationship with his siblings like? “I have a twin sister and an older brother. My older brother always seemed to have a plan. He executed on that plan. He was gonna get his good grades, go on to college with an alternative path of joining the military, and he did that to the tee. I remember him sharing this with me somewhere when he was 15. He is two years my senior. So I was 12-13. Then myself and my twin sister just kind of go with the flow, product of our environment. Very much one direction to the next was more so to do with who we were hanging out with.”

Oz describes what his early teen years were like when he was trying to find himself. “We (Oz and his sister) go into using meth when we were 13-14 years of age. We didn’t have a sense of belonging at home, or a community, or a family if you will. So, the brain says, ‘I have to find that somewhere.’ So some of us joined bands. Some of us joined sports. At that age, we sort of joined the gang mentality, and we gravitate towards that. I would say what probably kept me from going off too far on the deep end was that my sort of self-therapeutic mechanism. It was sports, and I leaned into sports. I got into mountain biking really early, I think at 13 years of age.”

What was Oz’s initial introduction to the military? “We grew up in an area where we had an alleyway, me and my brother would skateboard or me and my amigos that we would skateboard with. Around the corner was both the county courthouse and all four branches of military recruiting. So, we were very much imprinted and attracted to the posters and the billboards that were around this recruiting station all of the time. I can remember as far back as being 6-years-old, just always being impressed and being impressed upon by these billboards.”

How did Oz Sanchez ultimately sign up to become a Marine? “I ended up getting in a situation where we got picked up for looting and I lied to the judge saying I had plans to join the service and if I did any kind of time for looting than I would be ineligible and he doesn’t want to be responsible for ruining my life. Yadda, yadda, yadda. I wasn’t in any way this articulate about it. But he bit off on it. He obviously probably had a better idea what was going on that I did. He said come back here with some documentation and a recruiter possibly, and we will take it from there. So, I went across the street to the recruiter, told him my situation. It is a big sham. I want you to help me out. I don’t want to actually join, and the whole thing backfired in my face, and that is how I ended up in the Marine Corp.”

Were the rigors of Marine life a difficult transition for Oz Sanchez? “In boot camp, I didn’t really suffer a whole lot because, one I was pretty fit. I had sort of gravitated towards physical fitness. At about 6-7 years of age I remember I would do 100 ab crunches, and sit-ups, and push-ups, before going to sleep damn near every single night. Why was I doing this? I don’t know because nobody in my family prior to my brother and I, or in my generation I should say as well, really worked out. So, where that influence came from I have no idea. But I did have this thing to self-sooth because I was a really angry kid because of what we had going on at home.”

How did Oz Sanchez’s past motorcycle accident occur? “Now that I have worked through a lot of emotional stuff, I can say it was much in a large part to my own carelessness, excessive speeding, a lot of it. Sure, there was another car that ran through a stop sign. But if I wasn’t doing 65-70 in a 35-mile-an-hour zone, I probably would have had no problem evading the vehicle. But, since I was speeding, I ended up laying my bike down and having my accident, and breaking my back.”

During this episode of Finding Your Summit Podcast, Oz Sanchez compares fate and destiny and their roles in our lives. “Fate is not something we can influence. But destiny is something we can actually manipulate. The difference is that fate is like if a hurricane comes in or a thunderstorm, or a tidal wave and takes your home or whatever. There is nothing you can do around that. But destiny is a different thing entirely that we have the ability to create and manifest for ourselves.”