In today’s episode of ‘Finding your Summit’ podcast, host Mark Pattison, former NFL Player, Entrepreneur, Philanthropist and Mountaineer who just completed the Seven Summits, does a solo podcast on his reflections and thoughts on his climbing experiences on Mt Everest. He talks about his journey of climbing the summit and various challenges he overcame throughout. 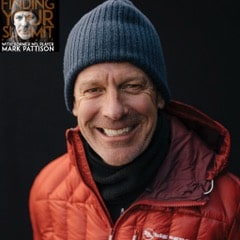 “I spent the night with no oxygen, so I was up there from gosh nine o’clock pm at night.” – Mark Pattison

“And so if you can imagine, landing and going uphill and slamming on the brakes, all at one time. It’s pretty terrifying.” – Mark Pattison

“It is 60 days when you’re up there, and there are a lot of things that go on.” – Mark Pattison

“It’s really critical that you are reaching down and you’re clipping into the right, fixed line, rope.” – Mark Pattison

“So, I finally get down to Basecamp, that’s around five o’clock and I just can’t believe what I’ve gone through” – Mark Pattison

“But my brain there was something in there that kept saying, do not get out of the tent until he knocks three jobs, I don’t know what it is.” – Mark Pattison

“When we got COVID tests at the hospital directly right when we got off the plane.” – Mark Pattison

“But now as I go forward I just don’t want to suffer anymore.” – Mark Pattison

“Follow me on this journey so as we go forward, I’m going to continue to do these podcasts, I’m really excited about them.” – Mark Pattison