On this episode of ‘Finding your Summit’ podcast, host Mark Pattison, former NFL Player, Entrepreneur, Philanthropist and Mountaineer & SI Executive has now climbed the Seven Summits. He talks with guest Trent Dimas, an incredible Gymnast Gold Medalist. Trent talks about his experience as a Gymnast and shares his Olympic moment and performance. 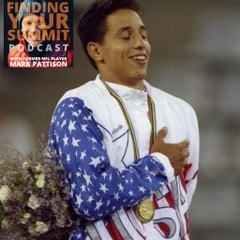 “In today’s environment, it’s tough to be the best in the world.” – Trent Dimas

“I kind of, I was one of the borderline guys, that there was a team that made six I was either, fifth, sixth, seventh, I was either right in or right out.” – Trent Dimas

“I was coming through the ranks. I couldn’t use what other kids were using they were using pure muscle to go through things. So biomechanically I had to learn everything perfect.” – Trent Dimas

“I would say, 80 to 90% of the college coaches in this country wanted me to fail, because it went against everything that they had set up for decades.” – Trent Dimas

“And you’ll notice that today people really don’t do the triple somersault anymore because you have so much momentum about 10,000 pounds of pressure per square inch as your landing, and then you have the momentum going backwards.” – Trent Dimas

“I remember looking up as the judges were calculating my score, and then you saw the first two guys that were tied for first you just see their names, dropped down shrunk, and you heard that noise. And you were like, oh my gosh, did I just move into first place in the world. It was, it was just amazing. It was, it was amazing.” – Trent Dimas

“It’s gold but there are a lot of games along the way.” – Trent Dimas

“Well, you. You did your best when your best was required and certainly when you’re going through those moments you know just before you got on the high bar, you got in the zone, and you know really doesn’t matter how you get there, sometimes it happens and sometimes it doesn’t. But you were able to capture that one moment in time and the beautiful thing is, you know you own that moment for the rest of your life, so now you get a, you get a gold medal.” – Mark Pattison