211: The Oldest American To Ever Climb Mount Everest

In today’s episode of ‘Finding your Summit’ podcast, host Mark Pattison, former NFL Player, Entrepreneur, Philanthropist and Mountaineer has now climbed the Seven Summits. He talks with guest Art Muir who shares his personal experience and journey of climbing up the mountains. They both discuss their journey of climbing up Mount Everest and recall their past experiences. 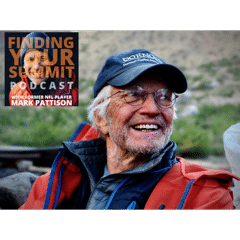 “Some days are better than others, but some days are really hard, and you have to be able to find a way to focus and hang in there and not give up.” – Art Muir

“You just become part of a team where you’re looking kind of through their eyes; you can’t see yourself really because there aren’t any mirrors.” – Art Muir

“I think it’s a disadvantage to look at me. Oh, there you guys are like really old, you can see it old guy but for me now seeing a bunch of people who were younger stronger, better, just more capable, more enthusiastic.” – Art Muir

“You’re all trying to get ready, you’re in each other’s way, a lot of elbows and feet and stuff like that.” – Art Muir

“I’ve fallen or harassed because I wasn’t careful and I fallen on a ladder so, my track record was exactly stellar.” – Art Muir

“I kind of go up to Mount at the top of Mount Everest, and I’m expecting to have this area would which is flat where I can kind of stand up and enjoy the fact that I’m on top of the mountain and there is no flat area.” – Art Muir

“So, you talked about, you know, starting to get your stuff ready with hour to before and we had 20 minutes and that is not a way to go take on Mount Everest.” – Mark Pattison

“You have to climb Mount Everest, but you don’t have to sit on a couch thinking I can never do this.” – Art Muir

“So, my message really is that people should be doing those types of seeking out those types of exercise. It’s good for them and they’ll have a better life.” – Art Muir

“Mountain was such a test of endurance, nothing else.” – Mark Pattison