In today’s episode of ‘Finding your Summit’ podcast, host Mark Pattison, former NFL Player, Entrepreneur, Philanthropist and Mountaineer who climbed the Seven Summits, talks with guest Sean Swarner (Speaker | Author | Performance Coach | Adventurer | World Record Holder) — a cancer survivor and the only person in history to climb the highest mountain on every continent, trek to the South & North Poles, and complete the Hawaii Ironman. Sean talks about his personal and professional journey of climbing the summits. 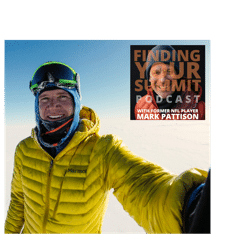 “I was reading your story and I was just, my mouth was wide open, and yet it’s just another example of people with an amazing human spirit.” – Mark Pattison

“I went to bed with an attitude of gratitude looking back, because like I said, closing my eyes let everybody be terrified.” – Sean Swarner

“Oh my God, I’ve got to go through this whole day again. I mean, what was that like?” – Mark Pattison

“So I think that it was just as you said. It was kind of turn the page, hit the restart button.” – Sean Swarner

“But when you’re in it, sometimes it doesn’t seem like there is a way out.” – Mark Pattison

“Yeah, I’ve said this a number of times, which I really feel is so that you have to train a strong body to have a strong mind, I don’t think it works the other way around.” – Mark Pattison

“We’ve never been to the top of any significant peak without a team.” – Sean Swarner

“If you asked me about the next challenge — I recently got married — I heard that’s pretty difficult.” – Sean Swarner

“Because sometimes people just need to believe that more is possible.” – Sean Swarner