In today’s episode of ‘Finding your Summit’ podcast, host Mark Pattison, former NFL Player, Entrepreneur, Philanthropist and mountaineer who has climbed the Seven Summits, flips the tables with John Waechter who interviews Mark about his highs and lows and what he went through. Mark shares his incredible life story & experience on Mount Everest. 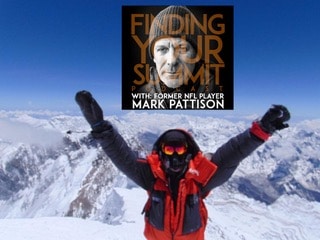 “My greatest takeaway from climbing Mount Everest, in particular in the Seven Summits, was that there’s never been a day that has gone by that in some way it didn’t touch me.” – John Waechter

“I always come from humble roots, my parents both school teachers, and they were always like, you know, just be grateful for what you get.” – Mark Pattison

“I think the biggest mistake that I see with so many guys is that they hear a number, and then expect to be in the first or second or whatever.” – Mark Pattison

“And when I was just at the Raider reunion recently, and those guys treated me like I was an All Pro, you know, for what I had accomplished on Mount Everest — It was amazing, right?” – Mark Pattison

“We have a vision, and the vision that I had was to create a magical place in Montana.” – Mark Pattison

“I think through maturity, through impairment, through the right kind of medicine, there’s a variety of things in that jar that have created, the last seven months for her have been seizure-free and it’s really a miracle.” – Mark Pattison

“Most of them don’t speak your language, which became a real obstacle with me and my sherpa on that day when I was trying to say ‘help’ — and he thought I was just having fun with them. Right? So, everything was different.” – Mark Pattison

“My biggest takeaway was when I was there having to focus on one single thing and not deviate for over two months. That was the hardest thing for me or the most challenging.” – John Waechter