Miles Burris: Transitioning from the NFL to the acting world and thriving. He was drafted as a Raider and played 3 years before finding his new passion and career. Learn what he did to discover his new path and what he’s excited about for the future.

Hey, everybody’s Mark Pattison back again with another great episode of finding your sum and all about people overcoming diversity and finding their way. And before we get to today’s rock star guests, I just want to draw people to my website, www dot mark pattison, NFL dot com. There’s two and fifty something podcast on there. I’ve been doing this now a couple of years, so please go in check them out. A lot of inspirational people doing amazing things, like the Guy I have on today. Um. Also, I’d appreciate if you gave a ratings interview on Apple. Always helps elevate lift the show more popularity so we can catch more people with a given these things that that they’re doing. Also, there’s a link to my Emmy Award winning, winning film searching for the summit. Um. I wish the NFL Um put to other so you can go and you can check it out. You can check out the trailer, you can check out the actual film. That links to NFL three sixty. It’s a bit hard to find through their system. And finally, I continue to raise money for higher ground. Um. There’s a link that goes directly to that organization. Um. It’s all about impowerment of other people who have been wounded, Um, in need healing, which we do so here in Cinemeli Idaho, which I am broadcasting live from right now. So if you want to go and throw in some little bit of money, every bit helps Um, and again we continue to raise money towards that emilities everest campaign. So on that note, let’s get in today’s great guest, Miles Burris. 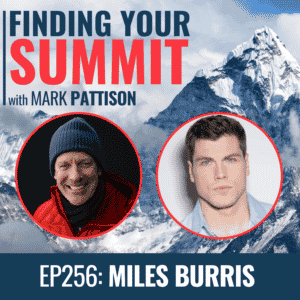