Tom House: A former Major League Baseball pitcher, now a world-renowned expert in the biomechanics of throwing, Tom is one of the leaders bringing science into the art of coaching.  He has a doctorate in sports psychology, and has written or co-written 22 books on throwing mechanics.
Listen to “Tom House: known as the guru of quarterbacks who has mentored Tom Brady, Drew Brees and many others.” on Spreaker.

Hey, everybody’s Mark Pattison. I’m back again with another great episode of Finding Your Summit, all about people overcoming excuse me, all about people overcoming adversity and making their way through it and finding their summit. So, anyways, I haven’t done this a little bit during the summer here, but we’re back on we’re back on track and before we get into today’s wonderful guests, we’re gonna talk about my website really quickly. WWW dot mark pattison, NFL DOT COM. There’s a number of things going on there. Number One, the movie searching for the summit, which one and Emmy for best picture, covering my Everest journey by the NFL Um, is now on that website. You can check it out by following the different lengths that are there. That’s number one. Number two, I’ve got over two D sixty podcasts of finding your summit with amazing people at the guy out today doing incredible things which will inspire all. And number three, I continue to have my hands knee deep in my flat. Philanthropy causes with with higher ground. That’s the organization that helps um process all these things and and drive money, Um and awareness to people who really need. A lot of these people are military folks who have had PTSD and have had adaptive issues with their legs and norms and things like that. So really about empowerment. My daughter also has epilepsy. So we created this found this campaign called the millions Everest, and we have now raised well over a hundre ground towards these great causes. So, Um, if you want to donate over there, go ahead. Of all the money goes directly to higher ground. 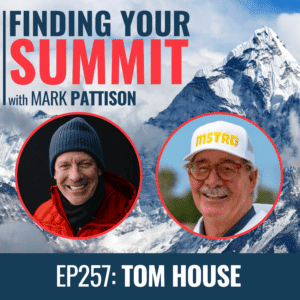