Hey, everybody’s Mark Pattison. I’m back again with another edition of finding your summit, all about people overcome university and finding their way. I’ve got a great guest coming out today. Look forward to talking to you. But before we get there, let’s jump to my website really quickly. WWW dot mark pattison, NFL DOT COM. A lot of stuff going on there. Of course, the Demi Award winning best picture that the NFL put on searching from the summit. You can see it there. That’s number one. Number two is I just got off this amazing climb down in the titons to climb the grand we took an all out effort to make that happen, but that’s so I can prep for next month over in Shamani, France and zormont climbing the infamous Matta Horn. So there’ll be more updates on that on the website. And then, of course, I’ve got over two hundred and seventy podcast of really inspirational people down amazing things, like my guests. That’s gonna come on today and we look forward to having you guys. Come on listen to some of these different people and if you would please give a ratings and review and, as always, I continue to raise money for higher ground through my campaign called Amilia’s Everest of all funds go directly to higher ground. Higher Ground Helps empower other people. My daughter, Amelia, has epilepsy, so we continue to fight for her and other people like that. 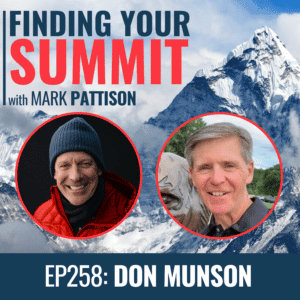