Mike Tomczak: I recently met Mike Tomczak at an NFL Golf Event. I had remembered him from his playing days against the Bears, the Super Bowl Shuffle, and his time at Ohio State. He had a great career playing 16 years and has continued to stretch himself with many different ventures he is involved with. The best part is his relationship with Youngstown State where he remains active with the school and football team.

The thirty third team dot com is your must follow for everything going on in the NFL today. With videos and analysis from current players as well as former players coaches in NFL Exacts, it will change the way you see the game. Plus, you can use the Edge, Football’s most powerful and informative interactive tool to guide all your fantasy decisions and wagers. And it’s a free find them online at the thirty third team dot com.

Hey, everybody, it’s Mark Pattison. I’m back again with another great episode of Finding Your Summit, all about people overcoming adversity and finding their way. Before do I get to today’s rock star guest, I just want to draw attention to my website www. Dot Mark Pattison NFL dot com. There’s a lot of things you can get there, one of which are more podcasts. Have done over two hundred and seventy five of these things of amazing people doing incredible feats, and we’re gonna have a really fascinating conversation today. But love if everybody would go in and give a ratings and review on Apple. It helps elevate the popularity of the show. And don’t we all need to be inspired? Certainly I do. Number two Uh, anybody who has not seen Searching for the Summit, the Best Picture Award winning Emmy that the NFL did on my Everest journey, you can find that on there as well. And finally, love and continue to draw interest to my philanthropy A millions Everest everything goes to higher Ground, which is the organization here in Saint Valley, Idaho, also in New York, in l A. It’s all about the empowerment of others and we continue to raise funds, certainly well over a hundred grand now, so proud of that fact. 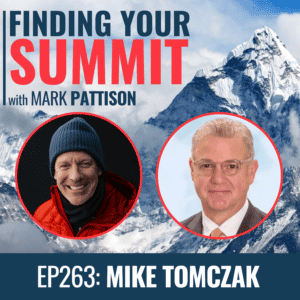