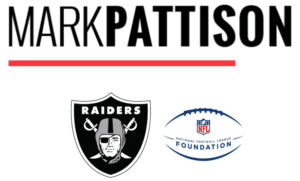 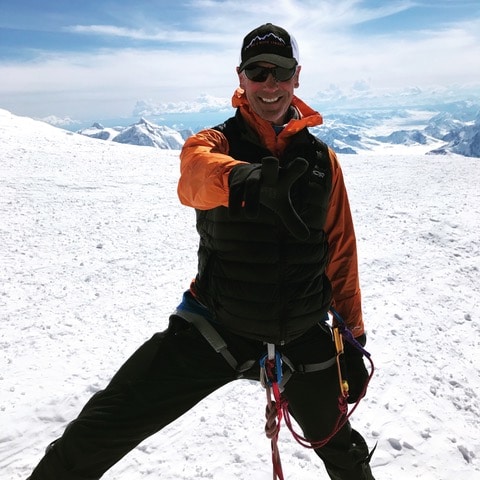 Former NFL player Mark Pattison to climb Mt. Everest and Lhotse within 24 hours to achieve Seven Summits in pursuit of setting Guinness world record as the 1st NFL player and oldest to accomplish.

SUN VALLEY, IDAHO—With the last peak of the Seven Summits to be conquered, former NFL Los Angeles Raider and New Orleans Saints wide receiver Mark Pattison plans to summit Mt. Everest in May 2021. Having to delay his climb due to the pandemic, Pattison has since added to his pursuit with a challenge to also scale Lhotse, the world's fourth-tallest peak within 24 hours of summiting Mt. Everest, which less than forty people have accomplished. The Seven Summits are the highest peaks on each continent and Pattison will be the oldest and first NFL player to reach all seven peaks with the added challenge of conquering Lhotse.

Pattison’s goals are not only to summit Everest and join the elite Seven Summits club, he is also on a personal and professional philanthropic mission. Pattison has dedicated his additional Lhotse climb to his daughter Emilia, who battles epilepsy. He has already raised over $27,940, the height of Lhotse, and has combined the goal with the height of Everest, 29,032 feet, to raise $56, 972, with all proceeds benefiting Higher Ground.

Higher Ground is a national nonprofit organization based in Sun Valley, Idaho, with locations in Los Angeles and New York, that uses recreation, therapy and continuing support to give people of all abilities a better life. They bridge the gap between disability and belonging by using the principles of therapeutic recreation in a completely inclusive way. Higher Ground employs certified therapeutic recreation specialists that have a variety of specialized training and experience with many physical, cognitive or behavioral conditions including epilepsy to ensure that participants receive the best and safest instruction possible.

“This is almost an impossible goal, but I’m finding my summit,” says Pattison. “Everyone in life has bumps and it’s how you address those bumps that helps you find your own summit. I have had to reinvent myself several times, as we all have adversity we have to overcome. To quote a former Raider’s teammate, when you have ‘an attitude of gratitude,’ you move forward. The Seven Summit quest with the addition of Lhotse is something I decided to go after, as I would be the only NFL player to ever do so, while benefitting those in need, which is why I partnered with Higher Ground.”

Pattison, an expert mountaineer, is also a successful entrepreneur, an executive at Sports Illustrated. Connecting with Higher Ground and their specialized staff of trained professionals, they can help those with disabilities including epilepsy, so they can reach their own summits.  The NFL Foundation has also partnered with Higher Ground through Pattison’s work to provide a social grant of $5,000 for Emilia’s Everest-The Lhotse Challenge.

“Having been a teammate, climbing partner and friend of Mark's for over 35 years, I can say without hesitation that he is a man of tremendous integrity, moral conviction and mental toughness,” said former UCLA Head Football Coach Jim Mora. “His ability to lead from the front and be a core team member speaks to both his strength of conviction as well as his selfless attitude. Mark has a vision and an energy that others are naturally drawn to, his ability to inspire others with both his words and actions are beyond comparison. This is a man that has reached the highest peaks professionally as an NFL player, in business as an entrepreneur, as a father and as a high-altitude mountain climber.”

The Las Vegas Raiders have also given $5,000 to Higher Ground in support of Pattison’s challenge and philanthropic goals in summitting Everest and Lhotse. “We’re proud to support a Raider’s alumni like Mark Pattison who carries forth the commitment and dedication to community, which embodies the spirit of the NFL,” said Las Vegas Raiders Vice President Alumni Relations Shannon Jordan.

Click here to learn more about Finding Your Summit Podcast with Mark Pattison.

Pattison will be streaming and updating from the Himalayas throughout his journey to summit Everest and Lhotse. Click here to see Pattison’s previous summits.

Mark Pattison was a high school All-American football player as wide receiver and quarterback at Roosevelt High School in Seattle, Wash. He was inducted into his High School Hall of Fame in 2005. At the University of Washington, Pattison played in two Rose Bowls, two Aloha Bowls and one Orange Bowl where he had the winning catch. He played under legendary hall of fame coach Don James and was inducted in the University of Washington Hall of Fame in 2016. Pattison played in the NFL for five years. He was drafted in the seventh round by the LA Raiders and also played for the New Orleans Saints.

After the NFL, Pattison became CEO and Co-Founder of Front Porch Classics, a venture-backed company that was acquired. Front Porch Classics invented the term Coffee Table Games. It received Toy of the Year in 2001 and 2002 and was sold in 2008. In addition, Pattison was CEO & Co-Founder of The Pattison Group, a multi-million dollar branding merchandising company, for 15 years.

As a philanthropist, Pattison has organized and raised $50,000 for Emilia’s Everest-Lhotse challenge for his daughter who has epilepsy and to raise awareness for the National Epilepsy Foundation. In addition, he has partnered with Philadelphia Eagles’ Chris Long and raised more than $46,000 to build water wells for the people of Tanzania through his foundation, Waterboys.org. They brought awareness to the cause by climbing Mt Kilimanjaro with other NFL Players and War Hero veterans in 2017. Pattison also raised $10,000 for inner-city kids of Los Angeles during his Mt. Kilimanjaro climb in 2013. Pattison is an available keynote speaker having been booked for high-volume events around the country in the last several years. 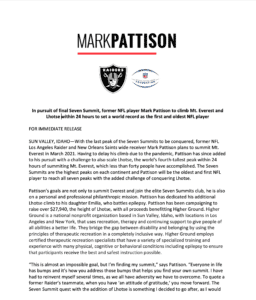