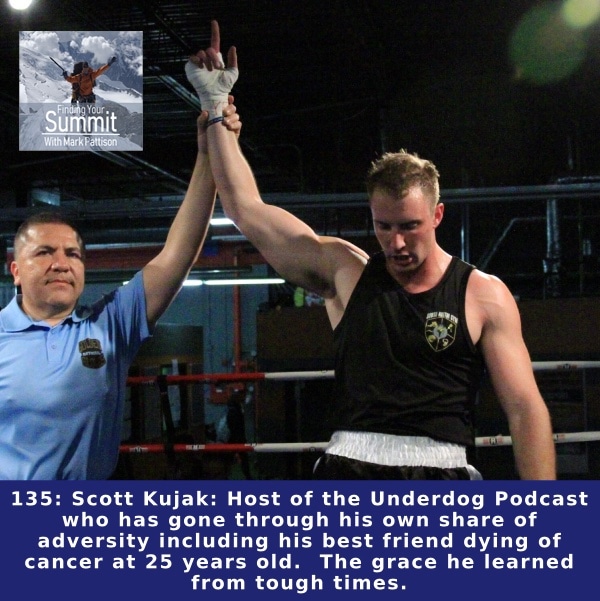 Scott Kujak is an ex-college football player who has gone on to live a life of lifting up those that have faced adversities head on. Hear how the obstacles that prevented him from attending his first choice for college, Texas Christian University, where he had a partial academic scholarship and a preferred walk-on position on the football team waiting for him. “I actually grew up in an impoverished area in Florida and just with my own financial circumstances and my family dynamics I was not able to attend TCU and cover the rest of the tuition. So, I went to Eastern Illinois University where I had a full ride offer and went there and played quarterback. I was actually backup for Jimmy Garoppolo, who is the quarterback for the San Francisco 49ers right now.” 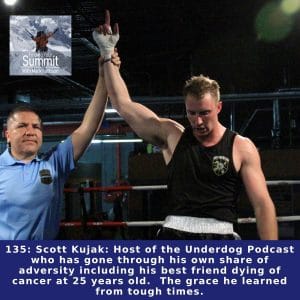 On this episode of Finding Your Summit Podcast, we talk with Scott Kujak, Author of Underdog: True Stories of Overcoming Adversity, Podcast Host of Underdog, and Territory Sales Executive at Beckman Coulter about his football experiences, and how his friend Phil Taylor, who died at age 25, was a huge inspiration when Scott was overcoming what he defined as the worst time of his life in 2016, when his ex-wife left him abruptly for good. “With Phil, he was also going through the worst time of his life. He was undergoing tremendous stomach pain and he didn’t understand why. A couple of months later, he went to the doctor and they told him he had a large tumor blocking his large intestine. Although we were going through two separate scenarios, we experienced a lot of the same emotions of doubt and anger and ‘what the heck is going on?’ Yet, his reaction to those emotions was often much different than mine. He often looked at it in a way of positivity and optimism.”

Scott Kujak talks about what he learned in terms of how to cope with adversity. “You can always make something good out of it. It doesn’t matter what you are going through. Cancer, someone dies in a car accident, you get walked out on, you have a devastating sports injury. No matter what the pain is that you face, whether it is physical, emotional, spiritual, you can respond in a way that makes a positive impact on the world.”

What  did Scott’s friend Phil Taylor mean to him? “Phil is a perfect example of someone who touches your life and just had a profound impact that he knew during the last couple of years of his life. But he won’t know the huge impact because he passed away.”

Scott Kujak talks about how Phil Taylor helped inspire his podcast Underdog. “I thought, man, he has had such an immediate impact on his circle of friends and family. What if I got his message out there to the broader public. How do I do that? I thought of podcasts because I listen to a lot of podcasts, especially when I drive and I thought, I’m not just going to interview Phil and be done with it. Why don’t I interview people who have overcome many different types of adversity?”

What was it like having Chris Norton, who has also been a guest on Finding Your Summit Podcast, as a podcast guest on Scott’s show Underdog? “One of his PR people reached out to me and when I read about his story, I was like, ‘Oh my gosh. Yeah. He has got to come on the show.’ Chris was playing football in college, just like you and I. He was at a D3 school in Iowa, and he was on a kickoff team and went to make a tackle and everything changed for him in a second. Bad tackle gone wrong. He was paralysized from the neck down, never to really walk or live on his own again.”

What about Scott Kujak’s podcast is therapeutic for him? “Common ground. I think it lays a nice foundation of common ground between us and whoever we interview across the world because we realise no matter how big or how small the name is, the person that we are interviewing, there are very common emotions that we all go through that no matter what the situation is, we can empathize with them. We realise, hey, what I went through, maybe compares or doesn’t compare at all to what another person went through. Like they had it way worse and yet they responded in a much more positive way and I can try to emulate that.”

Scott Kujak went from heartbreak with the end of his prior marriage to having his heart reunited with love thanks to his new fiancé. “She has been nothing short of amazing and just filled with grace and patience and love for me and for many, many others. She is without a doubt a Godsend and an angel to me. She has lifted me up at times when I felt down and she supports me and is confident in the person that I am today and the man that I will continue to become in the future. We are getting married in April 2020. We are really, really, pumped about it. I would do anything in the world for her”

The Power of Faith

During this episode of Finding Your Summit Podcast, Scott Kujak also highlights other amazing people that he has interviewed, many of the gems of advice that he has received from his podcast guests, and the power of his faith in God. “I love being in nature. It’s a huge reminder to me about how small I am here on planet Earth and how much I need God. How much I need my faith to carry on in life and do the things that God has put on my heart that He has only given me unique abilities to do, whether it is serving others or saying the right thing at the right time.”

Posted in Podcast Episodes
← 134: Mike Ramos: Former Olympic Decathlete who went through addiction to overcome and find his way running a pancake house in Montana…136: Unstoppable Tracy: Unstoppable Tracy is amazing in every way. Physical limitations have never slowed her down to do inspiring things and inspire millions. →