180: Kevin Richardson is a former Husky Football player who had aspirations of playing in the NFL but never happen and took him 33 years to move past it. Inspiring…

Kevin Richardson discusses where his early football journey began, before he was recruited to  play for the Washington Huskies in the mid-1970s, prior to Mark Pattison. “My time going up to the University of Washington was DisneyLand to me. Even though I went to high school and it was very prestigious in Sacramento, California, Rio Americano High School. It was known for its Olympic-caliber swimmers. Debbie Meyer, who won three gold medals in the ‘68 Olympics, was a schoolmate of mine and she is a dear friend to this day. There were others of course that earned gold and silver and bronze.” 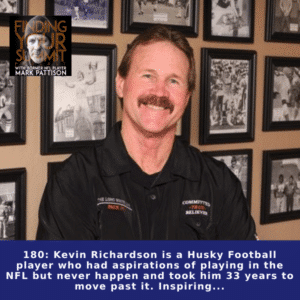 On this episode of Finding Your Summit Podcast, we talk with Kevin Richardson, book author at Morgan James Publishing, and former University of Washington Husky football player, about his attraction to the University of Washington. “There was this allure that was bringing to that gym of the Pacific Northwest, the Emerald City. So, it was like already in my DNA. It was just a matter of taking that first trip and walking out of that tunnel for the very first time with Lambo and looking up and seeing that huge concrete monolith on that other side and envisioning people in the sky.”

Kevin Richardson talks about an early football influence named Forrest Blue. “As I got to the U (University of Washington) I ended up blowing out my knee in spring practice in 1973, and under the tutelage of somebody I never knew would come into my life, a guy named of Forrest Blue, who lived in our neighborhood back home, I ended up having this impromptu lunch from a guy that brought his son to my mom’s daycare center in her home and I sat there and I talked to Forrest. He gave me the greatest sage wisdom in the world about moving on, down the road and projecting to the NFL, because that was where he was.”

Kevin Richardson discusses the process of revving up his momentum during his training process. “I needed to have a workout partner and I looked around the Huskies football team trying to figure out who that guy might be. There was only one guy that stood out and that was Dave Pear. So I approached Dave right before the Washington State game in 1973 and asked him who he was going to train with and he goes, ‘Well, I don’t know. Whoever shows up.’ Next thing you know, we become training partners. I became his personal trainer for the most part. We rub off on each other. His tougher mindset, street-fighting mentality rubbed off on this teddy bear, ok? So when I became a senior as a fifth year, I finally found my stride. I was there. At the end of the season I ended up leading the team in quarterback sacks and everything else. But my eyes were on the NFL draft.”

How did the weight of being downgraded from first team to second team feel when Kevin played as a Washington Husky? “My whole thing was I was going to start every game. I elevated myself. I was there. Everything Don James said to the media about me, the expectations they held, and everybody else, the press, family, friends, everybody, was just blown out the window. Nobody ever said why it was done, why Doug was put on first team in front of me. I was left spinning in the wind, twisting, unknowing. I’m this big passionate gentle giant teddy bear inside. But yet, I can be a hulk in a second on the football field. I can flip that switch immediately when needed to.”

Where did it all fall apart and get really tough for Kevin Richardson after not making it into the NFL after being so highly regarded at the University of Washington? “When this happened and I was put on second team, everybody’s jaws were dropping, lke what is going on? That plane ride home it started to hit me, and that was like November 20th, 1976 and by the end of January I was in full-blown out severe depression, suicidal ideation, creatively thinking of ways of ending my life. That moment changed my life, I mean completely.”

How did everything change for the better for Kevin Richardson? “When I started to write. It took me back to that deep, deep, deep space and I was able to start sorting everything out and going through those old dusty filing cabinets in the hallways of my mind and pulling this file out and pulling that other file out, and resorting it and shifting it, while new life experiences were happening at the same time. They were enabling this writing process. So, the whole truth about finding my way, the writing got me there. It was this writing-to-heal component, this journalizing thing that really flipped my go-switch to what I call the ‘God Side.’ It renewed my faith at the same time.”

Kevin Richardson talks about how writing has become his new purpose in life. “The writing was that golden key to that door to the other side, ok? But through this process, it is treacherous, Bro. You are opening a door, and your mind sees this door with this light beaming around it and a big sign, ‘Do Not Enter Danger,’ big flashing stuff, right? Your mind doesn’t want you to go there because it has to control you. The next thing you know you say, no, and you find the combination you open it and in there, and you are pulled into a vacuum of light that is so amazing that you didn’t even know it ever existed. But you hoped it did because it is going to show you something you always hoped and dreamed for. That is the same thing I was hoping and dreaming for when I had a childhood dream in this tangible, gravity-bound space of ours that we can touch and feel with our senses and everything else, right? But, I went beyond that. I went outside of that. I found my new reality and with it there was this force that I left behind that was trying to upend that whole discovery process.”

During this episode of Finding Your Summit Podcast, Kevin Richardson, also talks about his spiritual awakening. “Right now, these divine doors, God keeps opening these doors everyday to keep me where I am supposed to be until I get this book done and then whatever happens is going to happen of course. But I have always had this vision, this writing thing and this creative process is the real me and who I am really supposed to be in life, as my measure of giving back through my life experiences, the school of hard knocks.”