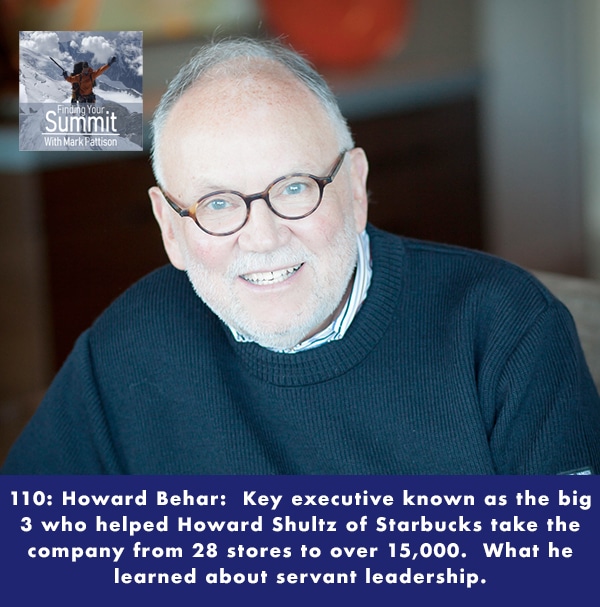 Howard Behar is not just the man that retired from the epic coffee company Starbucks, but he has been favorably referred to as “a hero of conscious capitalism.” At 75, Behar stills sits on the board of directors for Biller Family Foundation, is an advisory board member for Gonzaga Leadership Studies, a director for both iD Tech and Education Elements, and he also serves as an advisor for Anthos Capital. Somehow Howard Behar also manages to make time to be a public speaker addressing proper leadership and is an author of “It’s Not About the Coffee: Lessons on Putting People First from a Life at Starbucks” and “The Magic Cup: A Business Parable About a Leader, a Team, and the Power of Putting People and Values First.”

On this episode of Finding Your Summit Podcast, we talk with Howard Behar, an author, speaker, advisor, and most famously the retired President of Starbucks. Before Howard Behar met the other Howard, multi-billionaire and Chairman Emeritus of Starbucks, Howard Schultz, Mr. Behar had already been the president of a land development company in the Seattle area that he ended up having to sell. But like any great businessman or businesswoman, Howard realized that you don’t just rise to the top. You learn from the bumps and bruises that occur along the way. Becoming part of Starbucks, which has continued to make star-level bucks with revenue in 2018 of over $24 billion, still had many surprises for him when he arrived. Behar says, “Starbucks, I was trying to escape corporate life when I went there.”

Howard Behar has been to overcome both personal and professional challenges in order to achieve the dynamic level of success he has been able to enjoy stating that, “My challenges have been emotional and mental. And that is to believe in myself. It took me a long, long time to get to the point in my life where I actually thought I was worth while.” Behar also opens up about the hits and misses that Starbucks experienced, stating that: “People think that Starbucks was this race to the top. It wasn’t. We almost went broke. We almost lost it all. It wasn’t working well when I got there. We were losing money in Chicago and we weren’t going to get any more money unless we figured that out.”

Starting at Starbucks wasn’t all smooth sailing. Howard Behar was gracious enough to reveal that it took multiple separate occasions over the course of different years to not only get hired at Starbucks, but to also agree to the commitment that changed his life and that of the company itself. Mr. Behar originally met a Howard Schultz who wanted to be a star and shared his vision for a people-centric company that provided value to both the customers and the valued partners that worked for it. But the Howards didn’t always agree on everything. Behar said, “I didn’t want to report to a CEO. I wanted to report to a partner. I don’t think Howard (Schultz) understood that quite well at the beginning and it caused lots of struggles with Howard and I at the beginning. But we worked it out.”

The two Howards learned a lot about each other during the course of running Starbucks together. Howard Behar explains that Howard Schultz grew up in an abusive home and that he first worked at Starbucks then bought it, along with its 6 stores. Schultz’s vast vision for Starbucks was scalped by never taking “no” for an answer. Behar says, “All entrepreneurs have one word that describes them, and that is persistence.” In fact Howard behar talks about how Howard Schultz had 28 stores when he brought on Behar, who was a servant leader before Starbucks.

The incredible success of Starbucks, with over 50,000 stores on five continents, is an intriguing part of Howard Behar’s story. “I was an avid coffee drinker. I still am today and coffee is meaningful to me because its about conversations. It’s about romantic conversations, it’s about reading newspapers, it’s about being alone with you.” Howard Behar also tells a story about having two Starbucks stores that were across the street from each other, one called “The Suits” and one called “The Bikers,” in Vancouver, Canada. What was Behar’s answer to, why did a company like Starbucks climb the mountain of success while other companies didn’t meet the challenge? He says, “You aren’t just competing in the field. You are also competing off the field too. People, money, vision. “Tully’s basically, they weren’t authentic to themselves. They were trying to be who we were. And that doesn’t work in life.”

Leadership and learning are areas that Howard Behar is passionate about. Howard defines servant leaders as “Leaders are there to serve, not be served.” He explains how leaders that help their people reach their goals will create employees that serve the company better by saying, “If you aren’t hiring people that are smarter than you then you are going nowhere. Anytime you have to have an organization, you can’t possibly know everything, nor should you know everything.” Listening is the number one thing to succeed. Howard shares his belief that, “We weren’t in the coffee business serving people. We were in the people business serving coffee.”

Mentorship is sometime that motivates the nurturing work that Howard Behar still does to this day. He talks about a powerful mentor in his life, Jim Jensen, that taught his about affirmations and gave him “The Servant is Leader” to read, and that Howard has re-read many times over. Behar personally mentors six 2nd year MBA students at the University of Washington every year. He opens up about why having goals is integral to achieving anything in life with a quote that goes: “If you don’t know where you are going, any path will get you there.”

When Howard Behar retired from Starbucks they were in over 70 countries and 60-70 languages. But Behar’s belief system of The Six Ps” had a positive impact on the company for sure. The six Ps are: Purpose. Passionate. Patience. Persistence. Performance. People. He says, “The six Ps is really how I do everything in my life. I have a mission statement. I have core values. I have goals and objectives that I write down for myself.”

Behar now sits on boards, picks up a piece of trash each day, does mentor work, and puts 12 undocumented students through school every year and writing books that include “It’s Not About the Coffee: Lessons on Putting People First from a Life at Starbucks” and “The Magic Cup: A Business Parable About a Leader, a Team, and the Power of Putting People and Values First.” Behar firmly believes that, “There are no stressful situations, only stressful responses.” In his interview he also expounds upon the importance of  associating with people that share similar values, not necessary similar ideas, and his need to “Nurture and inspire the human spirit everyday.”

Posted in Podcast Episodes and tagged 7 summits, adventurer, author, bear attack, climbing, Finding Your Summit, grizzly, Mark Pattison, montana, mountains, outdoors, Overcoming Adversity, pete a turner, powder matt mosteller, Skiing, soul, steller, vinson, working on your soul
← 109: Chris Warner: Mountaineer, Entrepreneur, Emmy-Nominated Filmmaker, and Leadership Expert has reached his summit on some of the highest mountain peaks in the world.111: Debra Meyerson, PhD: Retired Tenured Professor at Stanford University and Author, has not only overcome a stroke that attacked the right side of her body, but she is helping others cope by releasing her book “Identity Theft.” →