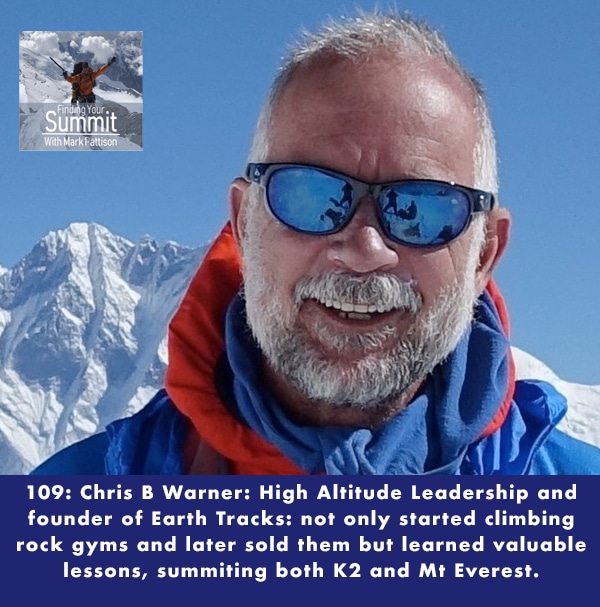 Chris Warner is a man who has fulfilled many forms of satisfaction thanks to his enthusiasm around the sport of mountaineering. The upward mobility of Chris’ journey has not only taken him to Mount Everest and K2 in Asia, but he has also evolved into a leadership educator at the well-respected Wharton School of Business for 15 years, the past CEO/Founder of Earth Treks Climbing and Fitness for 28 years, and a Keynote Speaker and Leadership Educator for High Altitude Leadership for 17 years. Through many dangerous treks as a mountaineer and over the course of plenty of television shows that have captured his adventures, the momentous momentum of Chris Warner’s career has expanded into a merging of his passions for mountaineering and his desire to lead teams and cultivate family.

On this episode of Finding Your Summit Podcast, we talk with Chris Warner, a Mountaineer who has now done 6 of the 8,000 meter peaks, an Entrepreneur for over 28 years, an Emmy-Nominated Filmmaker, and Leadership Expert. Chris describes returning from summiting Mount Makalu, the fifth highest mountain in the world with the height of 8,481 metres (27,825 ft), on the border between Nepal and China. Just how rigorous was this trek? Chris Warner says,

“In a 10-day time period you probably missed 3 or 4 days of total sleep, and average a lot of 3 or 4-hour days. Plus, you have the 12-hour time zone difference. You have all that stuff. That and a lack of oxygen. I think it really probably lowers your IQ by about 40 points.”

A lot of what he has to eat on mountaineering trips is on his back and refrigeration is tough. Chris shares, “Your at 24,000 feet or 25,000 feet trying to find an appetite to begin with. Even just trying to find enough fluids to stay hydrated. So you do end up in a stage of just constantly starving your body. Even at base camp, above 19,000 feet, we kill more cells in a day than our body can produce. So we are constantly atrifying.” His meticulous preparation and his love of working as a team has kept Chris Warner moving successfully through life.

Chris Warner shares just how important that understanding of your own human limits and self discipline is to the sport of mountaineering: “There has already been 12 deaths on 8,000 meter peaks this spring. The sad part to me is when you see people pushing themselves higher. So, the further you get from camp, the greater the danger that you are exposing yourself to.” Human error makes up the top four reasons people die on Mount Everest, which leads to not just the individual suffering, but also all the rescuers, and all family and friends back home. Chris reminds potential mountaineers, “I used to guide Everest and we used to tell people before summit push that there are 19 ways that you can die on summit day. And we used to tell people, just from the study of risk, we know there is always a 3rd thing that can kill you, and you’ve already made two terrible mistakes just being here.”

Accepting failure is a skill that Chris not only discusses, but insists is part of the journey by saying, “The coolest thing about mountaineering is failure is built into the sport and the process of dealing with failure after failure after failure really improves what psychologists would call your self-advocacy, your ability to pick yourself up after you’ve been knocked down.” Chris provides us will several ways to grow accustomed to failing and accepting it, stating that “There is something in this overachieving mindset that we think that we aren’t going to be able to live with our failures so we do everything that we possibly can to not fail, including put ourselves at this tremendous risk. I think when we all look back at it with more hindsight or wisdom, then we realize, actually, no, it is actually because of the failures that I learned the most.”

If you have ever wondered what makes K2 such as beast and what kind of mindset you need to have going in, Chris Warner, who has undergone three K2 expeditions, has the answers for you. He explains how the first one ended with a body tumbling down above his team into a rock and landing 500 feet away from them on the trail, becoming the most traumatizing human being he had ever seen: “I knew the expedition was over for me because as I was looking at 10 of these 12 guys, I knew that I couldn’t trust them. If they wouldn’t come 500 feet for a dead guy, they wouldn’t come 5,000 for me if I broke my leg.” He also talks about how much some of the expeditions cost per person, what to look for in team members, and how all three of his trips ended.

Let Chris Warner give you the goods on teamwork, sharing an amazing story of speaking with coaches for the Baltimore Ravens football team when they won the Super Bowl and why they had the word “Love” on the wall of the player’s weight room. Chris believes that being a good teammate involves thousands of small acts of kindness by saying, “If you look at any of these teams, whether it’s a workforce team or a sports team or a climbing team, the more that we can get everybody on the team to be the best version of themselves for the whole time out there, the more successful everybody’s going to be, and the greater the experience will be for everybody.”

Get a first-hand look at what it took for Chris Warner to create his indoor climbing gym, beginning with guiding a wealthy friend on a mountaineering trip and writing the 5-year projections for the business proforma on toilet paper and a sharpie during the trip. This led to this man with over 1 billion in real estate to tell Chris, “If you can prove that you can pay me back, I will lend you the money to do this.” Find out how this $400,000 first climbing gym eventually sold to a private equity group from Harvard and helping Chris to retire early at the age of 53.

A Business is a Family:

“Families get tested in all sorts of crazy ways,”  says Chris Warner. His story of having two of his employees have major cancer scares turned into the most defining moments of Chris’ life. The second guy who had worked there for 5 years had a wife that was pregnant and they also had a 3-year-old daughter when this man was coping with a rare form of cancer where the longest anyone had lived was 14 months. Helping this man is why Chris says you build a team and a business, so that you can rise to the occasion to assist them.

Chris Warner took his talents to television, landing 4-5 shows that broadcasted on NBC, ABC, and The History Channel as well. He even made the first reality show ever about climbing Mount Everest, got a sponsorship from Under Armour, and even went the do-it-yourself route with cameras from Best Buy. There are also further discussions about Chris Warner’s leadership expertise, valuable lessons he has learned along the way, and how his various friendships have enriched his life.