208: Journey to Adventure with Tom French

In this episode of ‘Finding your Summit’ podcast host Mark Pattison, former NFL player, entrepreneur, philanthropist, mountaineer & S.I. exec talks with guest host Tom French, mountaineer talks about his adventure experience on Mt Everest. These episodes are all about people overcoming adversity and finding their way. 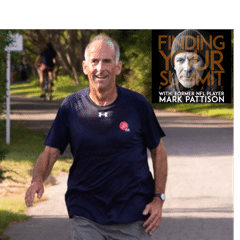 “But still, that says zest for the life of getting after things not being afraid to go after it.” – Mark Pattison

“You don’t just wake up and walk out the door and say hey I’m gonna go climb this mountain.” – Mark Pattison

“I think you make your own luck and climbing doesn’t mean you get 100% of the outcome you want, you don’t control everything.” – Tom France

“I use this thing quite often success leaves clues.” – Mark Pattison

“The phrase, you know, it’s as much the journey as it is the destination and I think so much of that is true and all these things we’re doing here.” – Tom France