On this episode of ‘Finding your Summit’ podcast, host Mark Pattison, former NFL Player, Entrepreneur, Philanthropist and Mountaineer & S.I. Executive has now climbed the Seven Summits. He talks with guest Brendan Suhr, longtime NBA, CBA & coach for the Olympic Dream Team. They talk about Brendan’s experience as a Coach and discuss his early life of how he got into this profession. 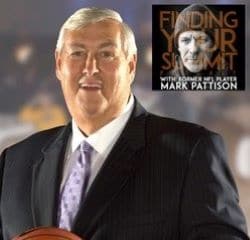 “We’re gonna make the best of it no matter what.” – Brendan Ahearn Suhr

“I just said, I want to be who that is. My mom said to me, we’re gonna send you to college—not to be a coach— we’re sending you to get an education. And I said, Mom, that’s what I want to do.” – Brendan Ahearn Suhr

“This always plays into things, which is one preparation meets opportunity, and then there’s a little bit of luck in there right because you happen to be in the right place at the right time, and with the right guys.” – Mark Pattison

“If your coach is the only one leading you’re not, you’re in trouble.” – Brendan Ahearn Suhr

“If you want to have great teams I’ve been on some great teams. You got to have that top down, you know where everybody’s rowing in the same direction.” – Mark Pattison

“Tom told me years ago he said coaching is about taking people where they can’t take themselves.” – Brendan Ahearn Suhr

“We were not the best players in the league. We played the hardest in league, we were the most physical.” – Brendan Ahearn Suhr

“You, in my opinion have the greatest collection of NBA talent, ever assembled on one floor Larry Bird Magic Johnson Michael Jordan Scottie Pippen John’s Donath Karl Malone, I mean, the list is insane.” – Mark Pattison

“You know my whole thing is based on your mindset, I think nowadays. I think it’s our greatest area to try to improve coaching and life is through your mental skills.” – Brendan Ahearn Suhr

“So, I just think, you know, mindset and your skills, it’s not like your personality which will be the same all the time, these things change based on circumstances that happen in life.” – Brendan Ahearn Suhr