Tom French: Tom French is an American mountaineer who I have climbed with on Mt Vinson in Antarctica, Cotopaxi in Ecuador and Mt EVEREST in 2021. Unfortunately, Tom didn’t make it to the top in 2021 due to a cyclone storm but reset his mind and came back strong in 2022 and got it done. Tom talks about his fascinating tale of how he was able to pull it off.
Listen to “Tom French: 1st Attempt of EVEREST failed. 2nd time was a charm.” on Spreaker.

Hey, everybody, it’s Mark Pattison, back with another great episode of Finding Your Summit, all about people overcoming adversity and finding their way. And before we get into today’s amazing guest—can’t wait to have him on—I want to direct your attention to my website. I do this every time I have a pod that comes out because it’s so important. Repetition is everything. First of all, there’s over 270 episodes that are out there. I would appreciate a ratings and review through Apple. It helps elevate the popularity of the show and we all need inspiration, even myself, and so if you go there and do that, I would greatly appreciate it. Number two is that I continue to raise money for Emilia’s Everest. It directly goes to Higher Ground, a nonprofit here in Sun Valley, Los Angeles and New York. It’s all about empowering other people. Many of these people out there, UM are military folks who need our help. My daughter also his epilepsy. So at the end of the day, it’s all about impowerment and helping. So if you want to go there, check it out. And finally, UM, the NFL did an amazing movie actually one Best Picture an Emmy for that documentary they did on my two um journey up and down Mount Everest, and so if you want to check it out there you can do. So there’s links that t qu right to that wonderful film, So go check it out. 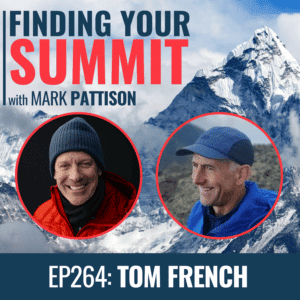