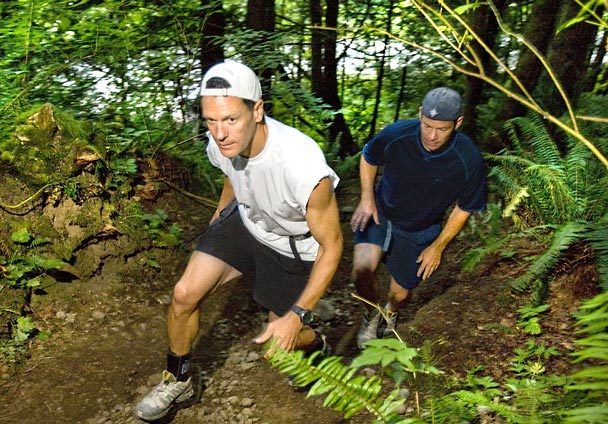 Bring some comfortable running shoes, and be on the mountain at 6:30 in the morning.

That’s the only warning Brian Russell and the rest of the secondary got from assistant coach Jim Mora before they arrived at Tiger Mountain one morning this offseason and looked up to see just how big of a challenge the Cable Line trail was going to be.

“If it were any steeper you’d need a ladder,” Russell said.

This is the Seahawks’ new conditioning benchmark, a path that climbs 2,000 feet in just about 3 miles, going straight to the top of West Tiger 3 in the Issaquah Alps.

The hill is so steep it’s hard to keep walking, let alone run. The workout is so stiff that defensive end Patrick Kerney lost his breakfast after a few minutes when he went up the hill last year, and Josh Wilson got lost on his way down the mountain this year.

Seattle’s rookies made the trek a little bit before that, including 318-pound defensive tackle Red Bryant, although you’ll have to take Bryant’s word on that. No one actually saw him reach the summit.

“I made it,” Bryant said. “That’s between me and God right now.”

The mountain isn’t part of the offseason conditioning program, it’s more like an unofficial test. One many of the Seahawks have sweated and stumbled their way through.

“It’s a mental challenge,” Wilson said. “You get back on the football field, none of this can break us if you’ve done that mountain. This ain’t got nothing on that mountain.”

An old friend and former teammate brought Mora to the mountain a couple of years ago.

It was Mark Pattison, the former Washington receiver whose hard-driving energy powered him through four seasons in the NFL and to a post-football career in which he started three companies.

Pattison is 46 now, and about 10 years ago he met this mountain trail that was the perfect match for his ambition.

“I really look at this as kind of a metaphor on life,” Pattison said. “You want to stop and you want to quit, but that’s the easy thing to do.”

This isn’t about climbing Tiger Mountain specifically, since there are higher peaks with longer trails. And it isn’t about time, since Pattison will still be running the trail this winter when the weather turns cold, the trail gets sloppy and the times can get downright glacial.

Running the Cable Line trail is more about dedication.

“It’s about not staying in bed,” Pattison said. “Because that would be easy.”

The easy way is one Pattison makes a habit of avoiding. In college, he knew how to hold on to the dramatic moment. The first touchdown catch of his career came with 34 seconds left in a last-minute victory over Michigan and his 73-yard scoring reception was the key play in the Huskies’ upset victory in Ann Arbor, Mich., the next year.

Pattison caught the go-ahead touchdown in the Huskies’ victory over Oklahoma in the 1985 Orange Bowl, a 12-yard pass from quarterback Hugh Millen. Millen has an open challenge for anyone to name a receiver in Washington with a more impressive trio of catches than Pattison.

Pattison and Mora run the Cable Line trail at least once a week. They leave so early in the morning they must wear headlamps because they’re up before the sun is during the winter months.

And when Mora brought the secondary to the mountain during the team’s offseason, he didn’t tell them anything about Pattison other than to say he’s in pretty good shape. Russell quickly found out that was an understatement.

“It became obvious within 30 seconds that this was just going to be miserable,” Russell said.

Pattison’s best time is 32 minutes, which is faster than any Seahawks player managed. Jordan Babineaux has run the mountain three times, and he’s one of two players to finish faster than Larry Marmie, Seattle’s 65-year-old assistant coach in the secondary.

Russell is the other, and he’s the one who really pushed Pattison.

“He had me running for my money,” Pattison said.

Well, maybe not exactly running. The hill is too steep for much more than a brisk walk, and even that’s a challenge to maintain.

“Your legs are burning the whole way,” Russell said. “It’s just a matter of not stopping.

“You just keep going until eventually — a long time later — it’s over.”