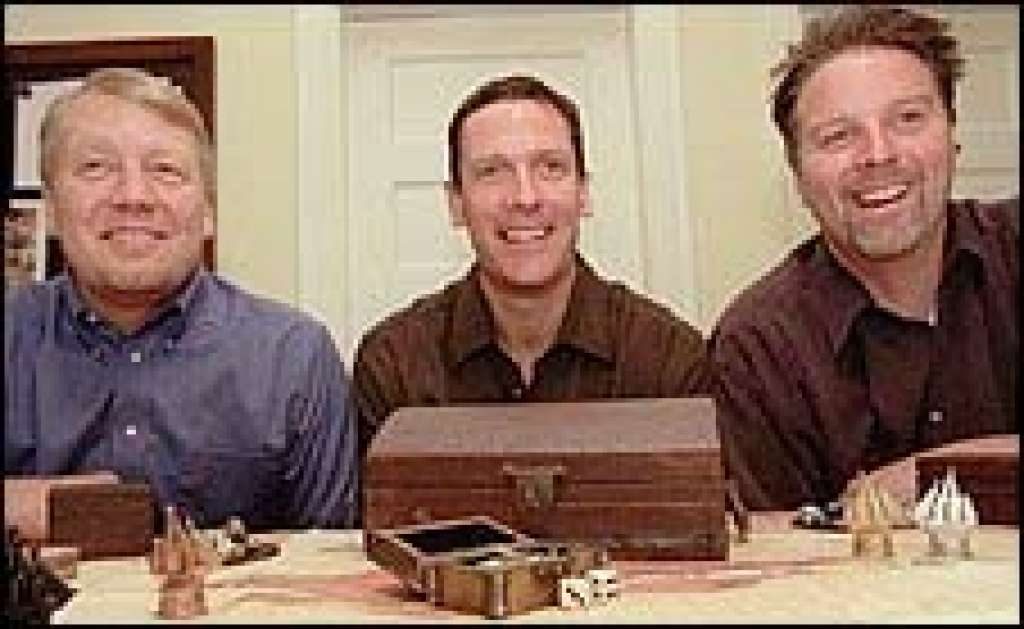 Back in the 1980s, when Mark Pattison was a Husky football player, he was known for things like 73-yard touchdown plays and acrobatic catches.

Now Pattison, who spent five years playing pro ball for the Los Angeles Raiders and the New Orleans Saints, hopes to be known for something else: Front Porch Classics, a start-up game company in Fremont that aims to draw young children and game-playing adults to its new line of retro, back-to-basics toys and games.

“When we first started putting the company together, it seemed like things were really going anti-tech, especially with the dot-com fall,” Pattison said. “Between all of our kids … we saw a trend of going back to the basics, back to the most authentic kinds of toys.”

The company, which was incorporated in October, was founded by Pattison, attorney-turned-screenwriter Steve Edmistonand Mark Jacobsen, former president and creative director for Madison Park Greetings. The company has raised $500,000 from angel investors to date and is seeking about $1.5 million more.

Within moments of meeting Pattison, Jacobsen and Edmiston, it is clear that Front Porch Classics’ founders dream big.

Pattison and Jacobsen said during an interview last week that they expect to sell $1.5 million worth of games and toys during the 2001 Christmas season. Within five years, however, they expect that figure to climb to $84 million.

“We have five different brands within the company,” Jacobsen explained. “We see ourselves as a Mattel without the plastic. Through the contacts and unique relationships that we have in the industry, we believe that we can penetrate the market quickly.”

After turning in his football jersey, Pattison founded the Pattison Group, a marketing firm that has done promotions for companies including Starbucks, Microsoft and Fox Sports.

Contacts that he established during that time with manufacturers in Asia as well as relationships that Jacobsen developed through the card business and other projects, the two explained, will help them propel their company forward.

“We have a running start,” Jacobsen said. “I have concepts back-logged and also I’ve done some prototypes. We have a lot of experience with major retailers.”

But even Cranium, which is considered a highly successful board game, has sold just 800,000 games to date. Though the company wouldn’t release sales figures, at the suggested retail price of $34.95, that’s about $28 million worth of Cranium.

While Front Porch Classics bills itself as much more than just a board game company — and indeed just one of the 12 products that will hit stores this fall is a board game — some Wall Street analysts were skeptical about the company’s $84 million ambition and how quickly it hopes to achieve it.

“It’s not inconceivable,” said Bret Jordan, an analyst at Advest Inc. in Boston. “But it’s unlikely.”

Jordan cited a contracting toy market as one of the obstacles that Front Porch Classics might bump up against in its efforts to grow. The toy market shrank 1.5 percent last year, he said.

That’s because children spend less time playing with toys than they used to, Jordan said.

“Kids get into to sex and drugs younger now than they did before,” he said. “There’s a shorter time in which to sell toys to kids, and there are still lots of companies trying competitively to do it. As a new player in a shrinking market, the company is going to have to take some market share away from someone else. I think that’s going to be hard.”

In addition to the board game, Front Porch Classics will offer a tabletop baseball-themed pinball machine, a sailboat-making kit and a wooden solitaire game, among others. The products will retail for between $20 and $120.

The company already has distribution deals with Barnes & Noble Inc., the Borders Group Inc., the Discovery Channel stores and Back to Basics Toys, a catalog and online retailer.

But what Jacobsen, Pattison and the others are really excited about is a pirate game that they think will be the crown jewel in the company’s collection.

The game, which will retail for $120, is contained in a wooden treasure chest. The board is a foldout map, and its game pieces are metallic pirate ships.

Edmiston invented the game during a ski trip with his daughters three years ago.

“We were having a down day and were shopping in a boutique,” Edmiston recalls. “I saw a chest that looked to me like a pirate chest. It really resonated with me that the chest should be more than a piece of furniture.”

So Edmiston created a dread pirate game and gave it to his girls for Christmas.

The game play is relatively simple. Each player is a pirate and travels from port to port trying to capture treasure, either from the ports themselves or from other players.

The company will also produce a series of books to accompany the pirate game.

Edmiston and the others gush enthusiasm as they talk about the games at their headquarters, three apartments in a building that Pattison has owned for a decade.

Shelves are filled with books like “The Complete Idiot’s Guide to Sunken Ships and Treasures” and prototypes of the company’s products. Last week, Pattison’s father-in-law worked busily in the back yard, putting up a small art studio that the company’s artists will eventually call home.

After a tour of the facility, it’s Jacobsen who sums up the company’s philosophy and mission statement most succinctly:

“I have five kids, and after a while you just get sick of all the plastic.”