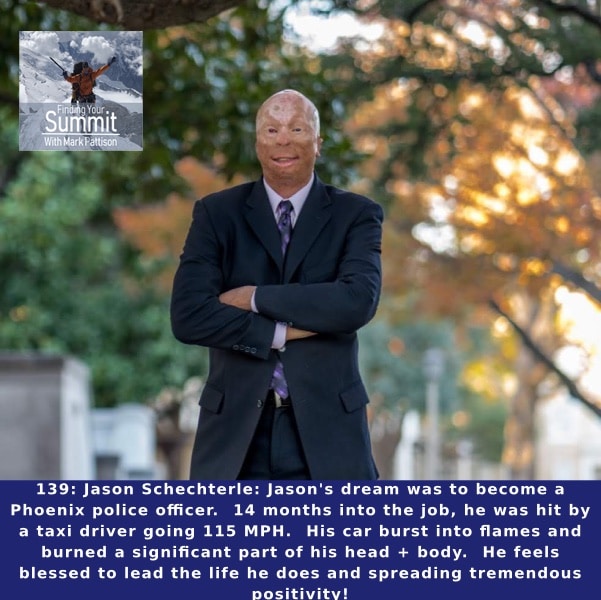 Jason Schechterle takes us back to March 26th, 2001 when he was just 28-years-old, 14 months as a Phoenix police officer in his hometown during a 10-hour-shift. With about one hour and a half left in his shift, he decided to take an emergency call that was out of his range near downtown Phoenix. “When you are running what we call Code 3, lights and siren, if you have a red light, you still have to come to a complete stop to make sure that people are seeing you from the other directions. They are going to yield to your vehicle. And it only takes a second to clear an intersection and just as I was going to proceed, my patrol car was struck from behind by a taxi cab.” 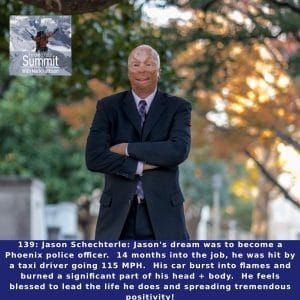 On this episode of Finding Your Summit Podcast, we talk with Jason Schechterle, Keynote Speaker, subject of the book, Burning Shield and co-host of Badge Boys on StarWorldWideNetworks.com. Jason describes the aftermath of his car collision. “I was knocked unconscious so, you get to erase the fear. You get to erase the chaos. You get to erase any of those memories. And even more importantly, my car burst into flames. It traveled 270 feet through the intersection and miracle upon miracle, twist of fate. You can put a lot of labels on it. But I came to rest 50 feet from a fire truck.”

What was the first ‘aha! moment’ that Jason Schechterle had prior to his injury? The first happened exactly two years to the day of Jason’s injury, when a Phoenix police officer was shot and killed in the line of duty, inspiring Jason Schechterle to be a police officer just like him. Jason also discusses the second event. “I think I have always been inclined to a call-of-service. I joined the air force out of high school, did my four years, really loved it. It gave me exactly what  I needed in life, a little structure, a little discipline. I was very proud to have served in the places that I did. When I came home at 22-years-old I wanted to be a cop.”

Jason shares exactly how blessed he feels to be alive after this ordeal, and the outcome of events that were involved in his survival. ”It took so many little pieces and little precious seconds and effort, different effort. One person couldn’t help me. It took a lot of people to get me, not only out of that car but to, what I am going to argue, is the best burn center in the United States. The Maricopa County Hospital, on their trauma table in less than eight minutes.”

Jason Schechterle talks about his initial burn injuries and the impact that he experienced in his body physically.  “I know with my injuries, from the neck up it was fourth degree, which like you said, down to the last layers of muscles and into the bone. My shoulders to my hands were third degree later. But probably in the initial stages they were severe second degree burns. Burns will keep on burning until a doctor gets all that dead bacteria tissue off of you, they will continue to get worse and deeper. That’s probably why burn victims end up with severe scarring.”

Jason Schechterle discusses how his eyesight was affected by his burns. “I currently don’t have my full sight. They were able to get me back, I was 100% blind for about 9 months…they actually covered my corneas with skin grafts because my corneas were severely damaged by the heat and fire and then, through a lot of medical procedures, even using my own blood as eye drops because your body heals itself so well, I was able to regain a lot of my sight.”

Jason Schechterle talks about what his wife went through during his recovery, including giving up her career. “I don’t think I will ever fully understand or appreciate what she went through in those first couple of months while I was asleep. We had two kids at the time, a seven-year-old daughter and we had a son who turned three while I was in my coma. So she had her hands full and she had to make all the decisions.”

Becoming an Agent for Change

How did Jason Schechterle make the mindset shift to be strong for himself and others? “I need to be accountable and when I recognized that, I understood that if all these choices got me here, then every choice I make starting now will take me where I need to go. Of course there were a lot of dark days. There was so much fear, so much pain, so much, ‘How are we going to get through this? How am I going to get through this?’ But the beautiful thing about positive momentum is once it gets going, it can be a powerful force if you just get out of the way and let it go.”

The fight Worth Having

During this episode of Finding Your Summit Podcast, Jason Schechterle also talks about starting Burning Shield and transitioning from being a police officer to being a public speaker. “We aren’t all going to catch on fire. We aren’t all going to play in the NFL.We aren’t all going to have children with diseases. Life happens to all of us. But the one guarantee is it is non-stop, that life is going to try to take you out mentally, spiritually, physically, emotionally and the fight that is so worth having is how do you not let one of those get too far down?”