In today’s episode of ‘Finding your Summit’ podcast, host Mark Pattison, former NFL Player, Entrepreneur, Philanthropist and mountaineer who has climbed the Seven Summits, talks with guest, Mike Eruzione (an American former Ice Hockey Player and an Olympic Gold Medalist). He shares his experience as a Team Leader, and talks about his hockey journey. 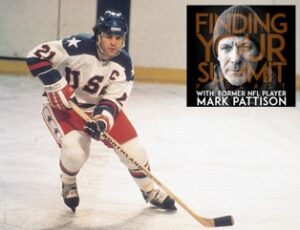 “I could see people coming up to me 40 years later and saying, boy, that was a great Olympics, but damn if you only could have beat Finland to win the gold medal.” – Mike Eruzione

“The weakest link of the chain has to be rowing in the same direction with everybody.” – Mark Pattison

“We didn’t feel pressure because we weren’t expected to win, maybe.” – Mike Eruzione

“My example is to just be myself. You can’t become somebody different.” – Mike Eruzione

“I don’t care if anybody reads them, but I want my grandkids, and someday their kids to know who I was and what my family was all about.” – Mike Eruzione

“You know my wife gets frustrated because I’m always happy and I’ve always got a smile on my face.” – Mike Eruzione